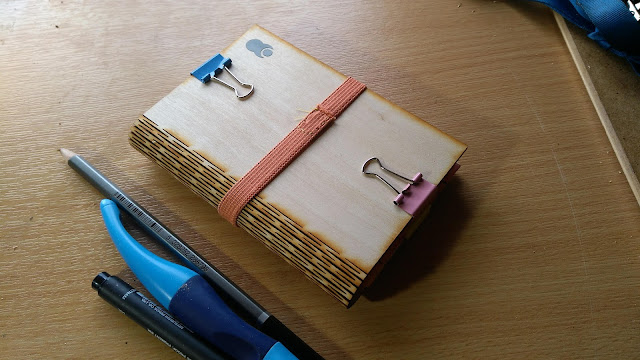 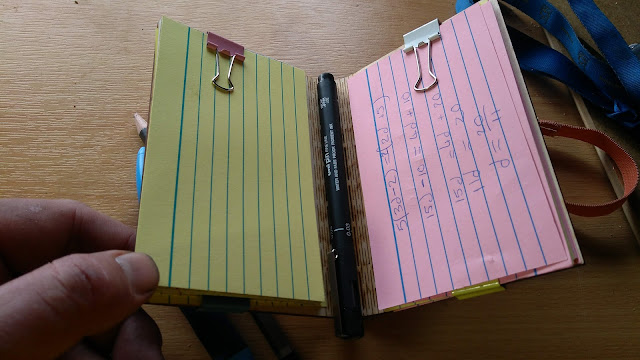 For more years than I care to remember I've been a fan of carrying a stack of index cards. As a freelancer trainer I used to pride myself in being able to whip up an interactive training experience if needed short notice with nothing more than index cards and a marker. I first came across the fact that there were others like me when I saw the Hipster PDA discussion over at 43folders  probably around 2007. I then had a brief peak of use with fans of the GTD productivity methods. Many people got into printing custom cards, calendar cards and more, but for me a plain old stack of cards and a binder clip was the classic. With one fault, after a few weeks of a deck of cards being in pocket they would look decidedly scruffy and dog eared. As such over the years a plethora of ideas to stop that have been deployed. The current one is this living hinge cover I drew up in inkscape and laser cut a few months back at the Ffiws Makerspace in Porthmadog. Cut from 3.125mm ply the hinge won't survive being sat on but is surprisingly robust, the clips work as well as they ever did and I use 4 clips so that some can be used as bookmarks for a current card over multiple projects. Finished with a small bit of elastic its easily pocketable and a good conversation piece when people notice the hinge section. :)

If you have access to a laser during these times (lucky you!) then I've posted the file on thingiverse for anyone to use.
Posted by concretedog at 09:52 No comments: 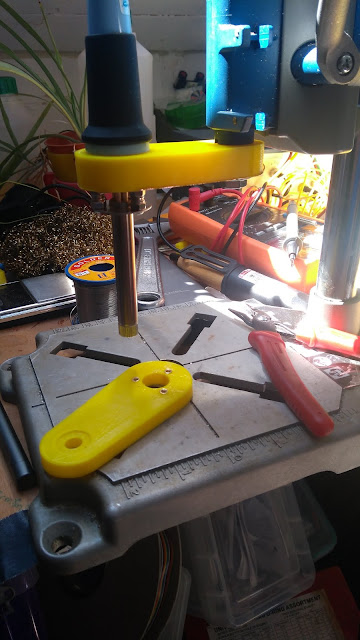 Years ago I bought a Dremel 220 drill stand to help quicken the process of drilling PCB's, there is a lot online about the Dremel 220 already, and most of it is true.. whilst it can be a useful bit of kit if its all you have its wobbly and annoying and although you can get good results, you would be much better off with a small cheap drill press! That said mine has seen some use, often rigged as an extra hand holding the Dremel to use it as a small offhand grinder etc. Anyway, I've wanted to have a better option for pushing thermal insert nuts into 3d prints rather than just a soldering iron in hand and a pair or pliers. I have a plethora of the super budget Makerslife soldering irons (I reviewed them here!) and decided to have an attempt at converting one to fit onto the Dremel stand.

At first I considered making some kind of adaptor that bolted into the existing mount for the Dremel and even got as fair as modelling the 18mm diameter 2mm pitch Dremel collar thread, but then realised that one bolt removed all the Dremel assembly from the main shaft and that it would be easier to have a soldering iron adaptor that just fitted straight onto the 16mm steel bar that acts as the sliding quill. 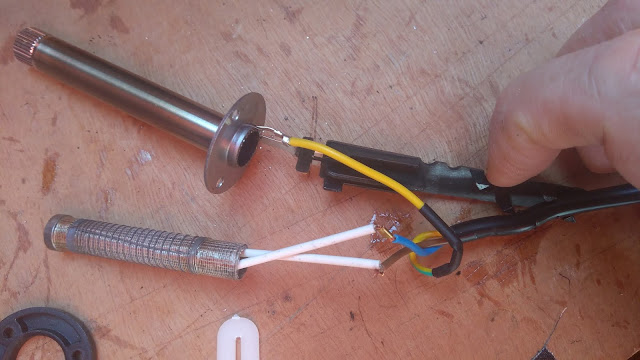 I designed and 3d printed an adapter plate and realised I could unscrew the hot end from the handle of the soldering iron and I aimed to place the 3d printed adaptor in between the end of the element holder and the soldering iron's original handle. Having disassembled I realised I could pass the element and the wires through the adaptor and only needed to cut the ground wire and re solder it together and heat shrink it back together once assembled. 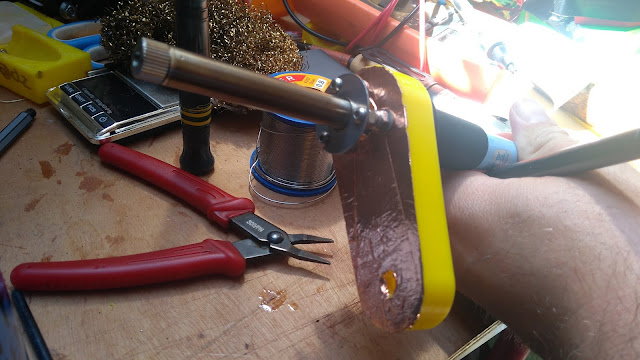 The first attempted adaptor was too thin and flexed and also showed that, despite the plastic 3d printed adaptor being in the same position as the original handle, it was going to get to hot and begin to soften. I thickened the adaptor design and reprinted it with more infill. I then also reassembled the MKII version with some copper tape acting as a heat sink and also mounting the hot end using some over-size nuts and washers as standoffs to try and promote some cooling. It's worked and I whilst i can use it for a session to fit a few thermal inserts I think continuous use would probably cause the adaptor to soften eventually. I think the next iteration will be to use the adaptor as a drilling template to make a steel or aluminium one! 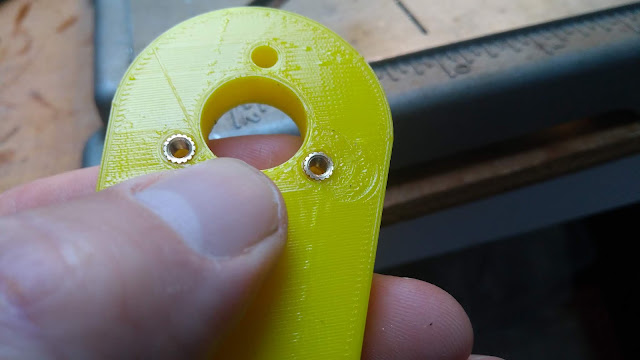 In testing it's been great, I could do with making some custom tips to mount on the end of the iron for different size inserts and as mentioned earlier probably remake the whole thing out of metal, however the inserts are going in well, and seem extremely strong!

Posted by concretedog at 06:56 No comments: 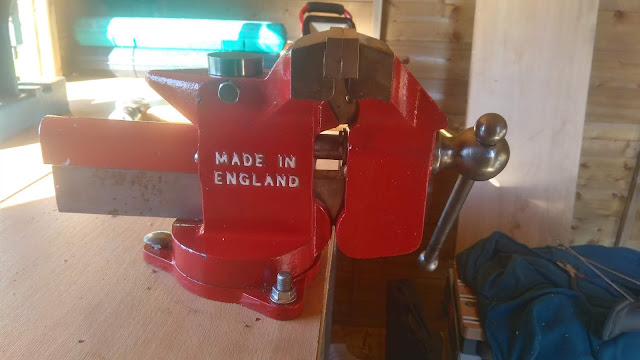 Ages ago on twitter I noticed a friend of mine Tim asking about vice options and I was very pleased to be able to tell him of my love for Record vice's and the Record No 0 I've had for a long while and the Record Imp tiny vice I restored a while ago. We discussed various models and I sent him down the rabbit hole of the Record 74 swivel vice which is an excellent bit of kit that I didn't own, but shared my admiration of.

A few weeks later Tim had found one near to him and had gone over and collected it and as it happened the seller had another. Tim was astonishingly kind and picked it up for me and sent it up to me as a thank you for helping him identify the vice he wanted.

It's so very swish, a lovely bit of kit! I've been waiting to affix it to a workbench as I wanted to save it until a shed reshuffle had taken place, which is slowly happening with a new shed having been erected in the last month or so. The vice looks great and its a real advantage to be able to swing it around and also to be able to swing it out of the way if needed. It's been well restored and cleaned up with a new set of jaws made for it (as well as the originals) and looks fab. I might get rid of the red on the screw guard at some point as I don't think it originally would have been painted, but for now it can be admired and put to use!

Posted by concretedog at 11:19 No comments:

The Rkub2 Microbit edge connector board 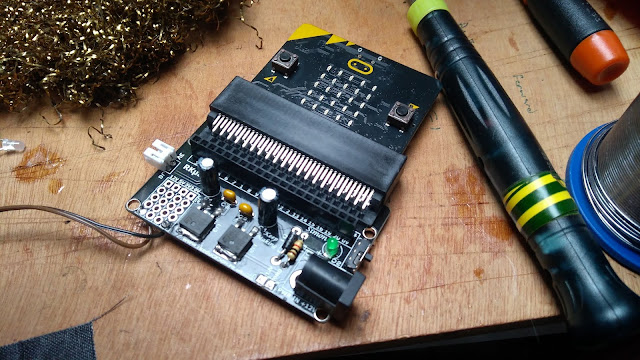 I've been tinkering with the micro:bit a lot more recently having used them for a couple of product reviews and tutorials for hackspace magazine. I was shopping around for an edge connector that I could use as part of a robot build that would break out the pins but also was able to handle voltage from a 3 cell 11.4v lipo battery. This RKub2 board was available on eBay for £4.99 delivered as a solder-able kit so it was worth a go.

It's relatively straightforward to put together with all the components being larger through hole types apart from two power regulators which are SMD but massive enough to be able to handle without tweezers! Once assembled it has all the pins broken out to a header socket row (or you could make this a row of header pins if you wanted to insert it into a breadboard more often). For power input it has a few interesting options. The first thing of note is that it has a connector for 3.3v which can receive the standard micro:bit battery box connector and therefore you can power the bit and have all the extra pins broken out using the standard 2 AAA batteries. On the other side of the board is a barrel jack connector which can receive a 12v input and also next to it are two pads for a 12v input. this is very handy as we can solder some wires with an XT60 connector to it and directly attach out 3 cell lipo battery. When powering the board from either 12v input a connected micro:bit is powered from the on board 3.3v regulator automatically and the whole unit can be switched on and off with the small switch. When powered by 12v (or 11.4v in our case) the board has a section on the lower right with power rails for 3.3v, 5v, and 12v (or the 11.4v input in our case).

For the project we had in mind for this board its been excellent as we were driving some motors with 12v driver boards and this board meant we had all the different power voltages and the micro:bit supply on the one board.
Posted by concretedog at 12:10 No comments: