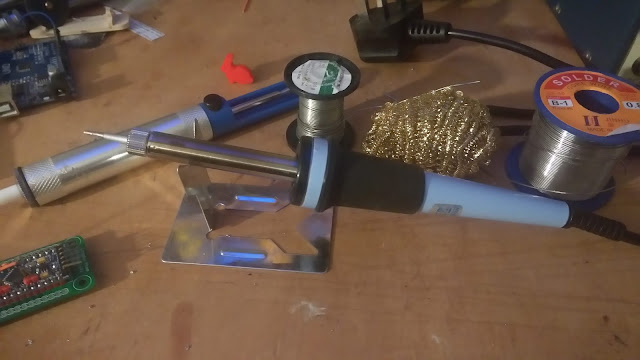 So I've been perusing cheap soldering irons for running soldering workshops and it's led to myself and Big Les P discussing and buying the various, super cheap, ones that CPC farnell sell.

Les looked at the 20 watt and 40 watt versions of the Duratool iron and found the 20 watt ones ok but the 40 watt ones not to good and likely to burn through tips. Check out his post for more detail.

They are similar to the other Duratool branded irons apart from they have a different type of tip and a different threaded collar that clamps the tip down. It's a nicer system than the screws on the 40 watt iron but it might be tricky to get replacement tips... But at £4.49 it's not too much of a concern.

In use the makers life 25w is pretty good. It has a slightly thinner tip than the 40w iron but it's still quite chunky and takes a little bit of getting used to after using finer tipped irons. The cable is about a meter long and reasonably flexible, it's definitely no high end silicon lead but is a little more flexible than regular mains cable.

The tip takes solder well and it heats up reasonably quickly for a cheap iron. It's good for through hole certainly, but it's fair to say  I wouldn't want to try SMD hand work with it.

So, it meets my needs, a working iron which is good enough for workshop users and cheap enough for me to buy a stack and not be too precious if they get abused or broken. As they are cheap (and I have the 40w ones too) they are useful for more hacky jobs... One may well become a thermal insert rig on my arbour press for fitting metal threaded inserts into 3d printed stuff! :)