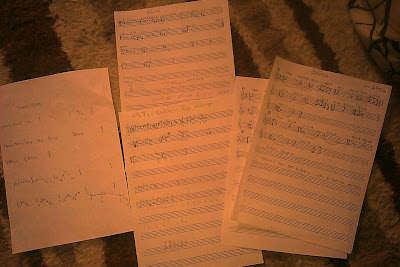 I've just posted 3 new demo's to soundcloud of some tunes I've been writing. I'm motivated at the moment to do some live none electronic stuff (I'm not stopping my electronica/experimental stuff just having a change for a while!). I'm hoping to try and set up a trio or possibly quartet to go out and play some of this original stuff in a jazz mode....meaning short tunes/melodies/heads and then solo sections etc in an arrangement. I've been slowly getting my transcribing/notation chops together with some great help from a good friend who's been an informal (and unpaid) online tutor! (Ignore the massive mistakes and faux pas in the music in the image above...twas ruff jottings and I've learnt a lot since then!)

Anyway here are the demo's, I would welcome and appreciate any comments. If you click through to soundcloud each one has a bit more info.


Posted by concretedog at 12:43 No comments:

Getting going with Rpi 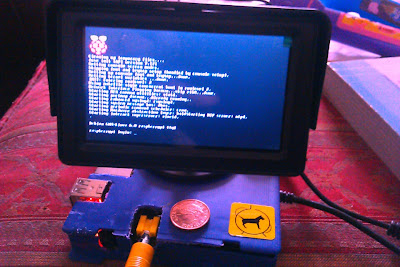 So if you're eagle eyed you may have noticed my previous post! I've had a few little bits of time tinkering with my raspberry pi....In brief here are the ups and downs...

I managed to get it working with this small 4.5" (diagonal) monitor, they're really cheap (this one 16quid) and are sold as car reversing monitors on ebay. It has a composite input and is listed as working with 12 volts...interestingly though when I got it out of the box it had a sticker on the back saying 9-35 volts..I've had it hooked up to a regulated 9v supply and it runs perfectly. I've even had it running of a standard 9v PP3 battery...so there's portable possibilities too!

I found it difficult to set up the screen and resolution for this screen but here are the links that gave me all the info I needed (HINT YOU CAN USE NEGATIVE NUMBERS with overscan_left= instruction in config.txt...if you get to do any display hacking you'll know what I mean)...heres the links

I also struggled in getting sound started via the analogue output...running this command worked for me...

which i got from this thread

I've tried to install numerous bits of audio software and I've not managed to get ANY of them working!! Which is a dissapointment...closet one was milkytracker which got to booting and the gui coming up but some sound driver issues stopped it from working! ...but I know I/it will get there..heck there are new OS's coming out for the pi left right and centre so the game changes all the time!!

Next on the list are to try the new beta debian image "wheezy" and maybe for fun have a look at archlinux.I've also been reading and watching videos about using the GPIO pins...reckon I'm going to try some little experiments in trying to get it to control some bits of BLARP!
I also have a tiny wired keyboard and integrated touchpad on order from shengzen so I can hook it up to my tiny Rpi and Tiny screen and pretend I'm a giant!
Posted by concretedog at 14:52 No comments:

Proudly posted on my Raspberry Pi 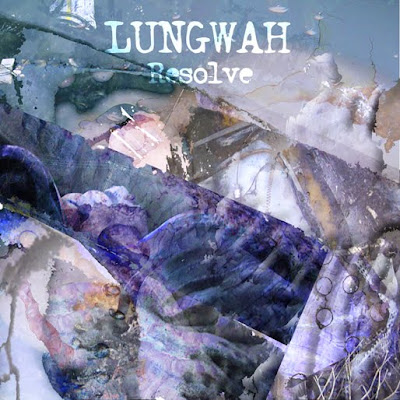 This marvellous album by my good friend Lungwah marks the final release for the amazing Warm Data label (which I am on!) whilst I am sad that there will be no more releases I can understand the reasons why it's time to bring it to a close. It will remain available for the time being and I urge you to check out the back catalogue all 33 releases have some amazing pieces on them representing a creative cross section of electronic music from Wales. But MOST of all check out this album......tis a belter to close the label with....


Posted by concretedog at 13:55 No comments: 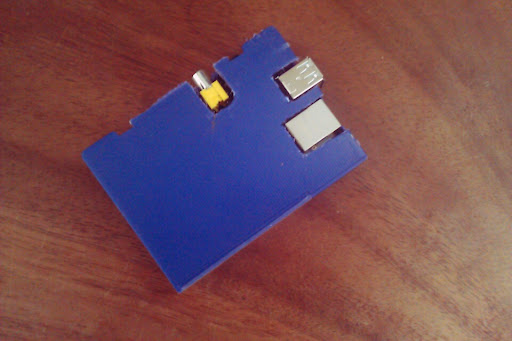 Needed a quick case for my raspberry pi. I found an old sony dv tape box that's internal dimensions matched the length of a pi with the sd card inserted. I don't plan to switch out the sd card that much as the os is running from it so it's not important for me to have access to it. Currently I have nothing that utilises the hdmi either so for now that has no access although I could cut this in at some point. The only issue with this case is that the micro usb socket used for power is recessed from its access hole by a cm or so making it a bit of a fiddle to connect a usb lead to. I may get round this by making a short power cable that I can leave plugged into the pi held in with a gromit (or hot glue) on the case (not the rpi itself!) 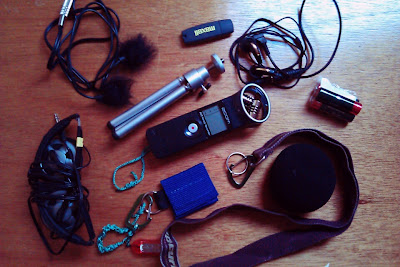 At the moment I'm doing a lot of field recording and recording at home using this rig above. On a sidenote this is because I'm currently without my zoom r16 as it's had to go for a repair. One of the preamps was cutting out intermittently but fair play to DV247 they arranged a courier and took it away for repair even though it was over a year since I bought it. Anyway I thought I'd stick a picture up and say a bit about my rig. I've got a few options for a recorder I have an old portable DAT (a sony D7) which still sounds gorgeous but is a bit of a faff to bounce stuff to the computer. My Boss micro BR which I still use (mainly with my guitar as a rehearsal/practice tool) but the newest kid on my block is the zoom h1. I'm pretty pleased with it...it's quick to boot and gets a decent sound through both the built in mics and through the preamp input.

So the picture shows;

Little square blue pouch containing spare micro SD cards I carry 3 8gb cards, and a couple of other cards I use as pen drives, this is attached to a clip and a micro sd reader (bottom centre)

Camera tripod for use with H1 (centre leftish)

USB pen drive...this is an old drive I don't use much anymore so it has a copy of my install of reaper on it (exact replica of the version I use on my pc's that can run straight of the pendrive on any windows pc)and also has a copy of Audacity portable on it. This is so I can do bits of work on my lunch hour using my works laptop on which they don't like us installing software. (top centre)

Neck lanyard and clip...this is so I can wear the H1 recorder round my neck when using the Binaural mics (usually under my jacket) (bottom)

All of this lives currently in one of these old nintendo gaming bags from the eighties! I went through a phase of buying up a lot of original gameboys for my chiptune adventures and ended up with a few of these. They're quite handy kit bags as the have 2 zipped layers and are well padded, they're obviously designed for kids though as the straps require a bit extra stitching in for adults! 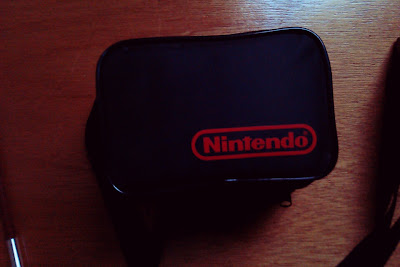 I'd like to add a diy shockmount and grip for the H1 as it suffers from a lot of handling noise but my current diy shockmount isn't suitable as it would cover all the controls on the H1 if I used it....so stay tuned for that one. I'd also like to make a 40db pad as the preamp is a bit hot for line level and you end up turning down the level on the device your recording increasing the signal to noise ratio. I also want to build a little box with a 2 channel passive mixer for use with a mono mic as I've learnt a trick where you record a mono mic to the 2 stereo channels with one lower than the other meaning if the hotter channel peaks you have another lower track which won't have peaked.

So having typed all this I realised it may not be the most interesting post ever...but it's exactly the kind of post I really enjoy reading on other people sites. Feel free to post your feild recording kit list in comments!

Posted by concretedog at 14:46 No comments: