So here is my quick picture dump post from Liverpool Makefest 2017. I was there showing some rockets and satellites stuff and had a great spot as the first stall in the foyer so got to tell everyone a bit about how much fab stuff there was to see and do as well as talk rockets/space/satellites.

I had a great time and didn't take much time off my stall to walk around as I was enjoying myself.. on a quick break (cheers Crew members who covered my stall) I  ran round and took a few quick snaps... not great but give you a flavour of the day. Hats and caps doffed to the mighty Liverpool crew who put this all together.. top work... 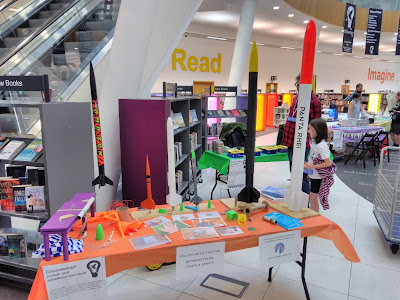 Above.. my stall all set up! 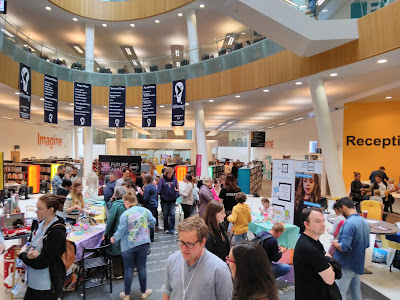 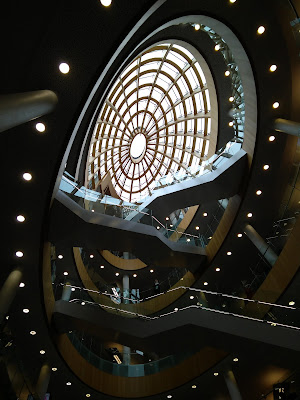 Central library is such a good building! 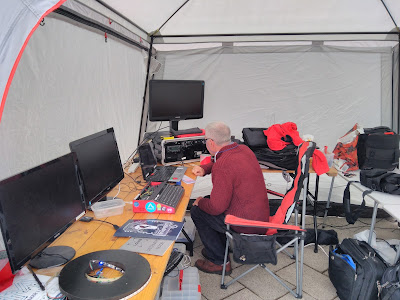 A group showing amateur radio tech and operation on the 4th floor terrace, great to see! 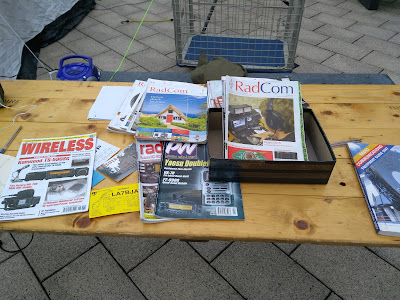 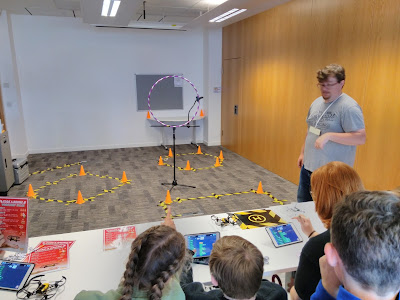 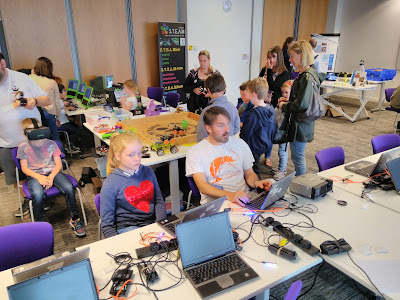 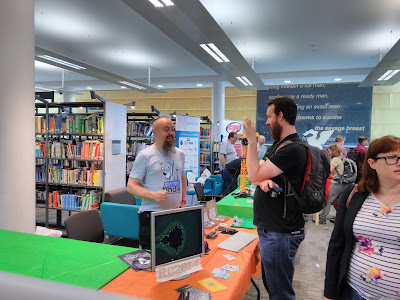 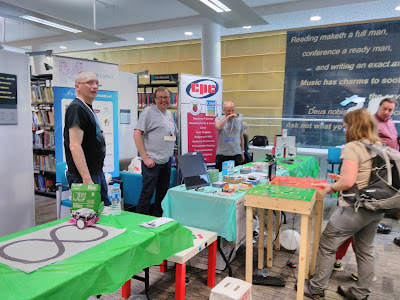 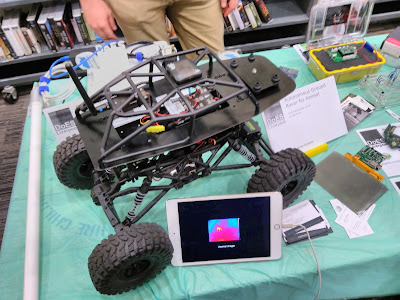 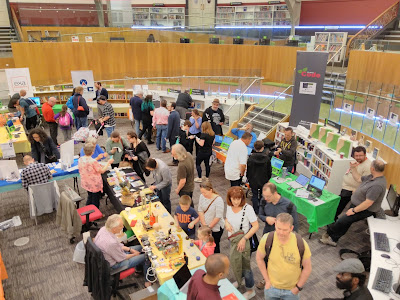 Still loads of people ... all day! 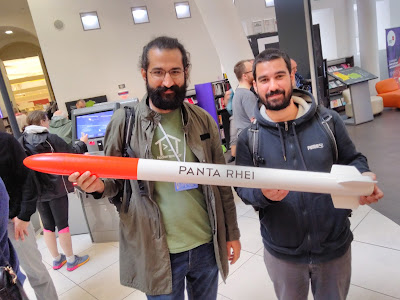 An absolute pleasure for me to meet these guys from the Librespace foundation.


Posted by concretedog at 12:13 No comments: 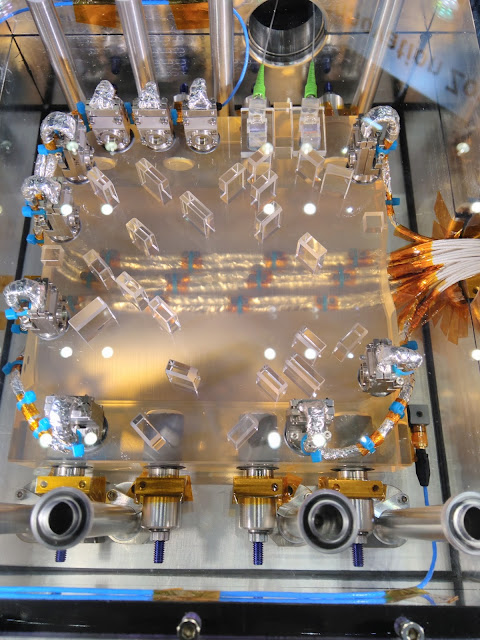 So probably my final post on the UK space conference 2017 as time is moving on! So during my time in the exhibition hall I saw some amazing technologies on display and also learnt of some amazing processes ranging from unit testing embedded systems, through new initiatives to make micro gravity science more accessible on the ISS through to the hydroxide-catalysis/silicate bonding of optical elements to a (beautiful) optical bed as part of the Lisa pathfinder interferometer pictured above.

It struck me as I walked around talking to everyone that it is JUST like a maker fair (but perhaps with less LEDs!) There are stalls that are purely outreach like the fantastic BIS, stalls selling tools, stalls selling measuring equipment, a vast majority of stalls showing and telling about their projects...

And the projects.. well they are super high tech and cutting edge a lot of the time..but although cutting edge often are they are essentially embedded systems..sensors and microprocessors with radios and antennas and power sytems...all classic maker fair projects!

These thoughts crystalised when I spoke (numerous times they were probably sick of me!) to the Ed Fagan booth, Ed Fagan are a global company that specialise in sourcing and supplying specialist alloys to the space industry. The first of which I heard about was 'Ultra 36' being discussed in a presentation by Chris Mahn. 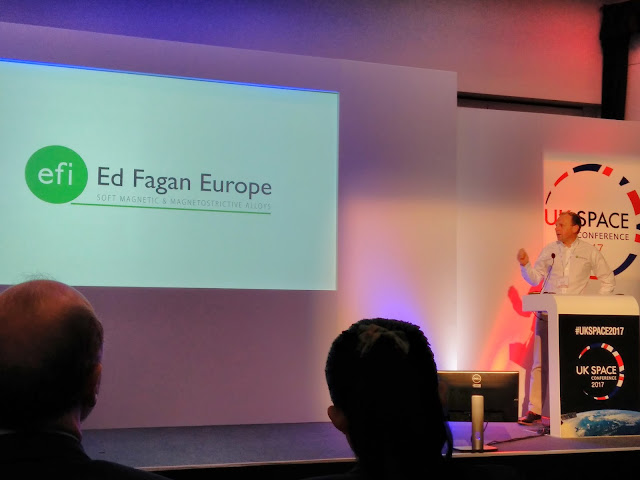 Frankly he had my attention just at the name as it sounds like a material from the marvel universe! On the stand we spoke about many of Ed Fagan metal products, Invar, Kovar, Ultra 36, they are materials with special properties such as special thermal properties. Objects in low earth orbit (ie satellites or the ISS) face a huge temperature range, for example without any thermal conditioning the ISS would range between plus 250 degrees celsius and minus 250 degress celsius so some of these special alloys are used as they contract and expand very little which is important as if something expands it might create a differential to the material it is attached too and cause it to fail.  Ultra 36 is an Iron, Nickel and Silica alloy useful for its low CTE (co-efficient of thermal expansion) and was developed as a partnership between Aerospace Metal Composites and the NASA Goddard Space Flight Centre and the amazing James Webb telescope contains 429kg of this fascinating material.

But again, talking to the men and women on the Ed Fagan booth what struck me was how like a conversation at a maker fair it was.. we discussed how it machined, what kind of tooling you need, what feeds and speeds you might use, a maker contact on twitter asked if it could be 3d printed?  We discussed that it couldn't as due to the way the structure of the alloy is achieved it can only be cold worked. I've had such similar discussions about..which nozzle to 3d print a certain filament or what feed for a laser to get the best cut on ply what angle tool for engraving a single side PCB.. again.. we are all makers...and makers... do some space stuff!


Its left me with a desire to try and track down a small bit of one of these fancy alloys to play with and machine.. so Ed Fagan thanks again for your time.. and feel free to send me a sample!
Posted by concretedog at 13:11 No comments: 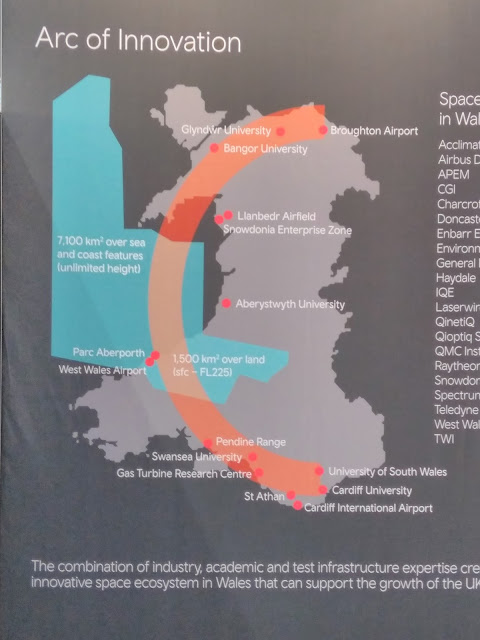 So part 2 . In this post I want to focus on the topics of UK launch provision and then focus in on some ideas for Wales... which could also equate to anywhere in the UK but Wales is where I live and I would love to see more space/astro/aero sector stuff happening! So I attended a plenary where all the speakers were talking about UK launch services, of course the space port licensing and development were discussed, but also the launch vehicles required for a space port where spoken about. The take away point for me was that although it may be possible to have some form of proto space port under way by the targeted year 2020 having a UK based and developed launch vehicle/s/system is very unlikely.

Any company bringing a launch vehicle online in this time frame would have to be at the stage of test launches (ahem Rocketlabs) now. The elephant in the room was that I don't think the UK is attractive to any of the larger players/primes involved in developing launch vehicles, vertical rockets or horizontal space plane. The challenges politically and the uncertainty of trade agreements due to Brexit are part of this, but also we are limited by our position on the planet, launch to LEO will be inefficient and whilst polar orbits may be achievable I think the larger players will look for easier sites.

The second takeaway point I took from the plenary is that all speakers agreed there were astonishing opportunities particularly for SME's to be disruptive in this sector in the UK. Launch providers are historically notoriously difficult to make profit in, are high risk and technically challenging, but these complexities, if embraced correctly, also provide the most opportunity for impact and innovation.

So here is my take on a possible progression route in Wales...

I think we need to play a longer game, I would love to see some energies focus on developing home grown launch vehicles, as mentioned, we are never going to hit the 2020 target, but could be a part of the 2030 target of the UKgarnering 10% of the expected £400 billion global spaceeconomy. I believe we need to invigorate ideas, explore bootstrapping and grass roots development and as such I look to numerous places for inspiration.

Firstly my recent trip to talk about Pocketqube satellite chassis development at the Delft Technical University also included a visit to the DARErocketry team . Basically they are well funded by sponsorship (3M, SAFRAN,ALTIUM, ANSYS, TUDelft and many more) and run a fascinating program which emulates the professional sector in that they hold contracts to supply rockets for programs like the CANSAT program, the program turns out fantastic young scientists and engineers who have a heap of very real industry experience and creates great vehicles which have held world records in altitude in non commercial flights. Having visited the team their energy and enthusiasm is as infectious and as inspiring as the IP developed and the learning undertaken.

A program like DARE in Wales could be achieved across the Universities or indeed could be formed privately in terms of an SME with commercial aims as well as an educative mission campaign. CANSAT type programs could be linked into school, colleges and voluntary sector STEM/STEAM orgs. There are numerous things in place already that would support it. For example, I've recently took a position on the council of the UK Rocketry Association , who manage insurance and accreditation for those wishing to fly high power larger rockets in the UK up with up to O impulse solid or hybrid motors. As well as accreditation, a technical safety panel and other services, we offer a program called “team rocket support”  which supports and guides teams wishing to build rockets at the top end of these impulse levels (level 3 certified). UKRA also has measures to streamline the number of people on teams who need to be accredited in order for a team to fly. For a developmental launch vehicle program I believe this is invaluable and provides easy to reach high altitude experimental platforms/sounding rockets within reach building not only technical expertise, but building the narrative of Wales in space.

Secondly the top image on this post is taken from the exhibition stand from Wales Aerospace and shows the unlimited ceiling de restricted airspace sat next to Wales, this provides huge possibilities for both horizontal launch and vertical. With the recent development of sea launch by organisations such as Copenhagen Sub Orbitals  (as well as Space X) I think this could provide a safe and exciting test bed area for launches prior to land based launches.

As ever, feel free to disagree... but I hope this post stimulates discussion and hopefully inspires some movement, action and progression.

In future posts I plan to talk about satellite developments that have already happened in Wales and also those organisations and companies that could easily mobilise in this sector and also about some fascinating materials I learnt about at the UK space conference.
Posted by concretedog at 11:28 No comments: 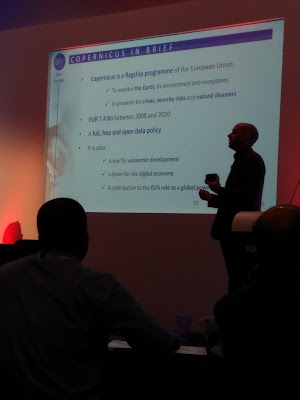 If you follow me on twitter it won't be news to you that last week I was lucky enough to be sponsored by the mighty Zero Dependency to go to the 3 day UK Space Conference. I had an amazing time and there was a bewildering amount of stuff to see and hear and I'm going to share a few posts of curated bits and pieces I took away from it.

One of the first talks I went to was by Georgy Dean from Astrosat talking about the Copernicus Masters program, the ESA Copernicus  program is astonishing. Within the Copernicus mission three satellites Sentinel 1,2 and 3 are currently on orbit and have a wide range of sensors and imaging equipment doing earth observation. Every time they pass over the EU region they complete a full capture of all the sensors... and all this data is opensource. That’s an amazing amount of data that anyone can use and use cases were shown from local authorities looking at the change in green zones around cities to flood management research.

The Copernicus masters program seeks to maximise the impact the mission can have by promoting Copernicus data and enticing people to consider innovative uses for it in creating applications.
Joining the Copernicus masters competition means people can get a whole heap of support through from the program with regular series of online webinars and other support activities. There are competitions and funding opportunities for those creating interesting applications. In the closing part of Georgy’s talk it was notable that she felt that (due to the overwhelming amount of data available from Copernicus) the future of tackling this big data will possibly lie in the creative application of machine learning and AI.. so if you are into open data, big data and neural networks... get stuck in!

Stay tuned for part 2... when I get chance!
Posted by concretedog at 14:16 No comments: