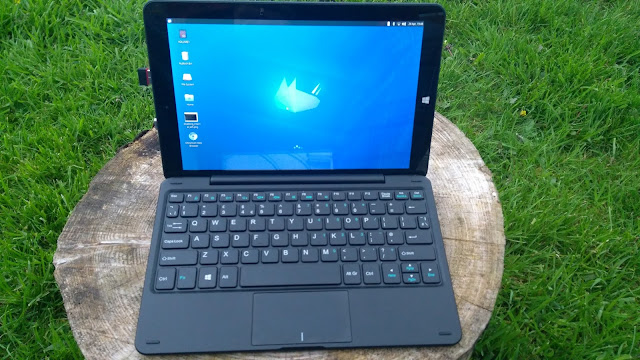 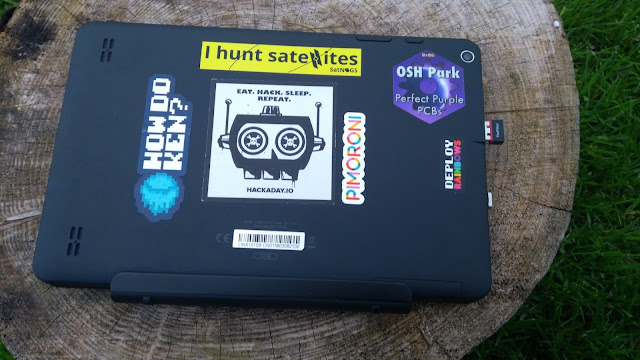 So ages ago I needed a windows 10 box for some open university software for a module I was doing. I picked up this Linx1010b baytrail powered tablet with keyboard dock for not very much coin and it certainly did the job.  I like it as hardware and tbf it worked ok with windows 10 for the tasks I did on it... since the end of the module though I have not really used it and a big part of that is that I'm a linux dude at heart.

So I decided to have a crack at getting a linux distro on it. A quick search revealed that it was possible but a little complex as it requires a 64 bit distribution but uses a 32 bit uefi. However I also discovered a brilliant tool isorespin by Linuxium which respins any 64bit iso and makes it bootable on not just the linx1010 device but many bay trail or apollo based devices. Not going to give many instructions on the isorespin tool as the linuxium site has plenty!

I respan 3 different linux distributions Ubuntu, Lubuntu and Xubuntu, all booted on the linx 1010 and ran but with a few niggles on each. Ubuntu seemed a bit bloated and lubuntu and xubuntu seemed a bit quicker. Lubuntu and Xubuntu each had the issue that the screen on the linx1010b was rotated to portrait view, with lubuntu this was cured by downloading and installing ArandR which allowed screen rotation... but didn't persist on reboot. Another problem with Lubuntu was once the display was rotated the the axis on the touch screen were inverted and reversed, this was true in xubuntu also but again for xubuntu I found a persistant solution for this.

I also had problems with wifi on each of the distributions, I found that the adapted wifi driver included in the linixium respin tool worked.. but only partially.. wifi would connect during the installation and on first boot.. but if I made any change to my wifi connection or indeed tried to swap to a different network it would fail until I rebooted again. I haven't quite solved this but have a workaround in that I am using a usb ralink wifi dongle which works flawlessly and I had disabled the internal wifi on the linx1010b (details below)

So my process for Xubuntu to install and solve the few niggles is ... 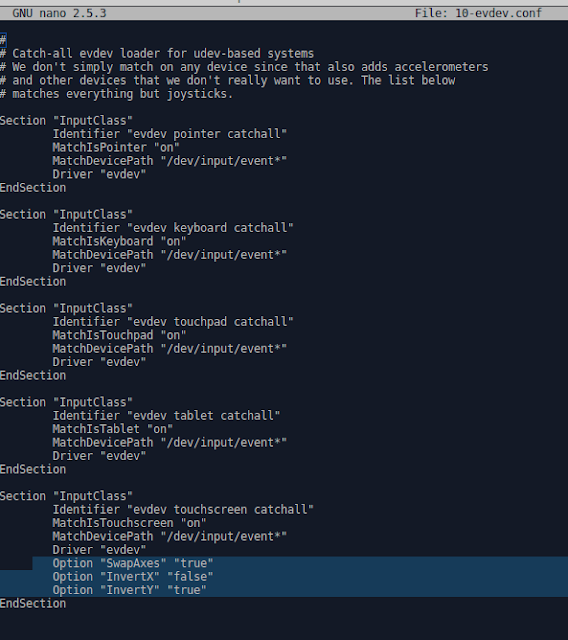 And your touchscreen should now be working.

You should then when you click on the WiFi applet only have the external WiFi card enabled by default.

Finally I found that the installed firefox browser wasn't to good and wouldn't run youtube clips very well, for a long time I have been a chromium fan and indeed it didn't dissapoint after install with everything streaming and audio working etc... I always forget that to install chromium it isn't just apt-get install chromium but is in fact

So there we go... I love it.. its a really nice super portable and has a great 9hr battery life and now lives up to its super hacky collection of stickers! I know that the mighty @biglesp is working on a similar project getting linux running on an apollo based teclast t7 so keep an eye on his blog for that!

Basic Income, Bereavement and Being Human 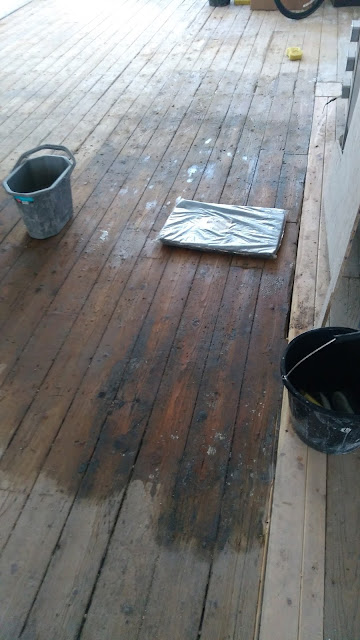 A great guy, Mike Scott, who works for Indycube once said “basic income allows us to be adults” meaning we can get the work done but build it around our responsibilities and day to day duties as adults, parents, carers, household runners etc. I’ve been thinking about this a lot due to a recent bereavement. Sadly, my lovely step dad, had a brief but brutal battle with cancer, a hospital journey of 9 weeks which led to him passing away, too young, but with dignity and peacefully.

His last day I took a days basic income allowance and made the journey up to Liverpool to spend some time with him, there was no booking of carers leave, no forms, no conflict, just me calmly moving my diary around and speaking to those I needed to. I spent hours with him and my mum, supporting, hand holding, crying and laughing… the saddest stuff yet a healthy way to be and we all had the opportunity to say the things we needed to say.

Halfway through the day I needed a break, emotionally drained I needed to do something. I knew that the fabulous DoEs Liverpool had just moved premises as I had visited the new place a few days before. I went over for a couple of hours before returning to the hospital later. At DoEs I had some hugs and then did a good stint with a scrubbing brush, removing the paint and dust and decades of grime from a few square metres of flooring. Therapy indeed and a good break, no finer act of solidarity for a great makerspace and co-working space that also (like indycube) recognises the co-working visa.

My stepfather passed away that evening. Thank you Basic Income for allowing me to be human that day.

Posted by concretedog at 13:06 No comments:

Very quick visit to the NEW DoEs Liverpool! 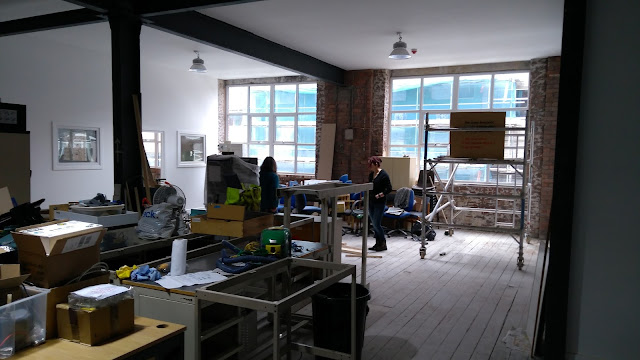 Was up in Liverpool today and some planets aligned and I managed to get a quick visit to the new DoEs liverpool building! Today was the day that all the kit from the old Gostins site was moved across so it was a brief nip round the unopened site to look at the space that was quickly filling with all the trappings of a maker and co-working space.

Here are a few pictures but the takeaway point are.. ITS BIG (much more room for lots of creative stuff and kit and co-working!) Its light.. Gorgeous big windows and lots of internal glass walls give it a really light and airy feel.... and its COOL.... there are lots of features of the original building left and it has some real character! Its a super, functional, accessible place and is going to be amazing.

It was utterly heartwarming to see the DoEs community in there working hard, full of laughter and team spirit... if you want to feel that warm glow also I can heartily
recommend chipping in on their fundraiser... >>>>>>> DONATE HERE!!!! <<<<<<< 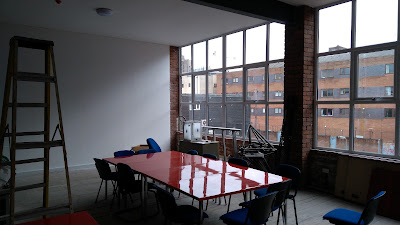 Just one of the lovely rooms in the new building. 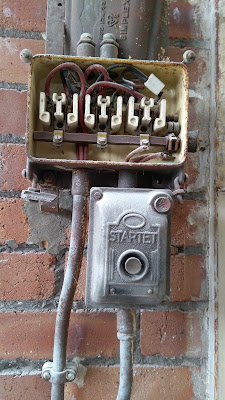 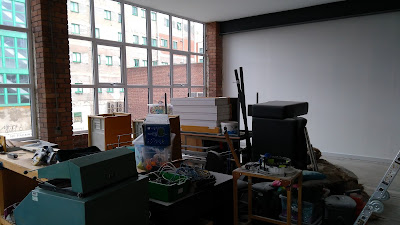 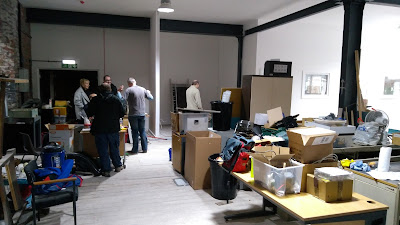 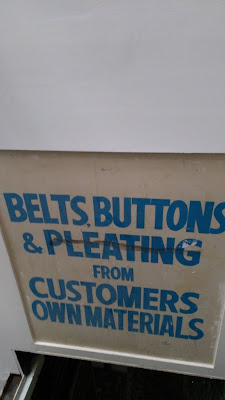 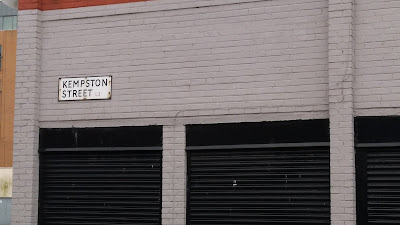 Finally... as I walked off to where I was going next.. I noticed... its on Kempston St... I am hoping for some amazing retro joystick themed makes coming out fo the new place!!
Posted by concretedog at 13:01 No comments: