Quick and dirty timelapse of me patching Blarp, audio is parts of the patching session with a hint of reverb and delay.
Posted by concretedog at 13:46 4 comments:

I have carried on working my way around my new £15 Canon A470 and CHDK and got an intervalometer script running..I had imagined that I would do endless timelapses of clouds in the sky but due to the grey monocloud that has been everpresent over the north wales sky that would have been a bit featureless! So when I rebuilt this Puch E50 engine I had stripped down I thought it would be a good subject for a timelapse.

Incidentaly I got a great bargain in a charity shop the other day this... 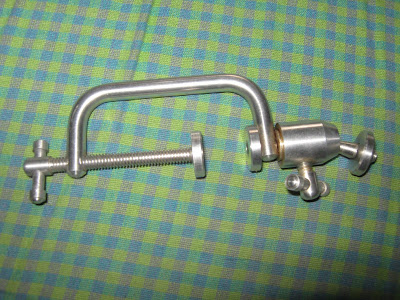 It's an old camera clamp, really nicely machined out of aluminium with a ball joint on the end the camera mounts to, it's really sturdy when done up and light enough and small enough to mount to any small protrusion...for 99p...nice!
Posted by concretedog at 07:15 No comments: 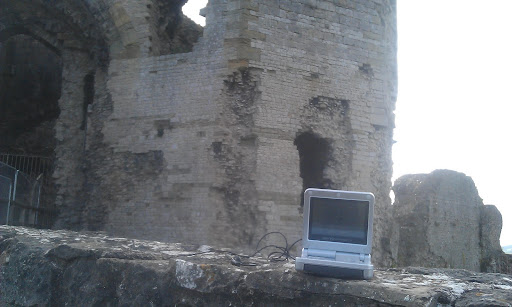 I do enjoy nanolooping in castles! Nanoloop 2.2 is currently providing a bit of inspiration for the final quarter of my album which I hope to finish in the next couple of months.

Posted by concretedog at 05:09 No comments: 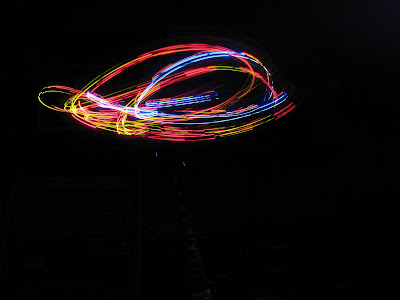 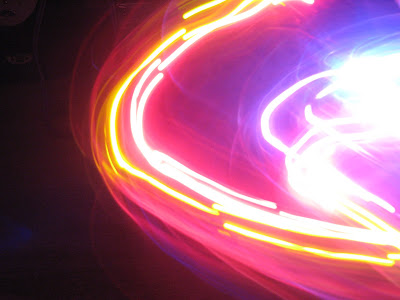 The shots above are what you get when you take a £15 camera, hack the firmware to enable long exposures and then string up a DIY Synth (BLARP) and take some shots of her LED's swinging! This has come about as my elderly canon powershot a430 was getting mightily outdated so I picked up a canon a470 for £15.56 from ebay. I was particularly interested in this model as it is the lowest canon powershot model that is reported to work really well with CHDK (stands for Canon Hacking and Development Kit). Basically CHDK is a firmware patch that's loaded from the SD card (you can return your firmware to normal whenever you like). CHDK opens up the firmware in many ways and gives you much more functionality than standard, I have full control of exposure times up to 64 seconds and down to superfast, full control of ISO (the shots above are shot at an ISO of 5 with an exposure of 4 seconds). Whilst the shots above are JPEG I can now shoot in RAW, do bracketing for HDR etc etc. One of the finest features of CHDK however is it's ability to load user written scripts from text files. There are loads of examples of user scripts online that can acheve many other functions, I've been playing with a script intervalometer for time lapse, motion detection scripts and thats just the tip of the iceberg. I'll post the results of further experiments.
Posted by concretedog at 13:16 No comments: 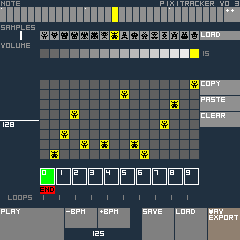 Pixitracker is one of the examples included in the coding software Pixilang developed by Sunvox creator Alex Zolotov. Pixilang (and things built in Pixilang) can run on Windows, Linux, WinCE/windows mobile OSX, and has just, as of yesterday been updated to version 3. Pixitracker is a sample based tracker with a really intuitive GUI and enough features to make it useful whilst maintaining a simplicity that means you instantly get to arranging patterns without getting bogged down in patching and effects and stuff..I like it. The original Pixitracker file runs in an average PDA screen size of 240 x 240 pixels (as above) and as I've been using it on my Jornada I wanted to make some changes...now I am no coder...I've done a bit of object oriented stuff in synth building enironments but thats about it...However reading the documentation here and looking at the Pixitracker code I managed to make a few Jornada useful changes.

So as you may see (click the image above to see it's actual size) I've increased a lot of the sizes of the GUI elements making placing notes etc a lot easier and increased it's size overall to 640 x 240 to utilise the Jornada screen, I've also increase the step length of each pattern to 32 and also increased the number of Patterns to 14, having discovered how to do this could also make versions to do alternative time signatures etc. Finally I messed about with the colourscheme a bit just for kicks. I'm not going to put the code up for this as I reckon if I can work out how to do this.... anyone can!
Posted by concretedog at 12:47 3 comments: