It's been a privilege to write for the Raspberry Pi foundations Hackspace Magazine since October 2018 and I have been meaning to create a post about various articles I have written but never got around to it. So I thought I might create this post with links to all the issues I have article in and a little description of the articles and keep adding to it as (hopefully) the articles keep getting commissioned and published! 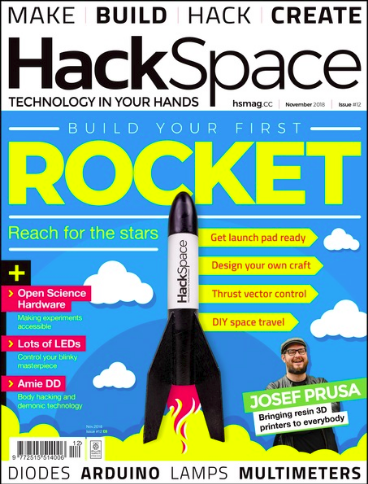 Issue 12, Where it all began! I had a "design your own rocket" tutorial in here using the amazing opensource Openrocket design and simulation package.

Issue 14,  An article on Manual Milling machines and beginning machining.

Issue 15, An article on Lathes and their use and a review of a Neke Laser Engraver.

Issue 16, An article on Making a multi headed screwdriver using the lathe and mill and a review of the Eleksmaker Eleksdraw pen plotter.

Issue 17,  Part one of a two part introduction to laying out PCB's for professional fabrication with Kicad. 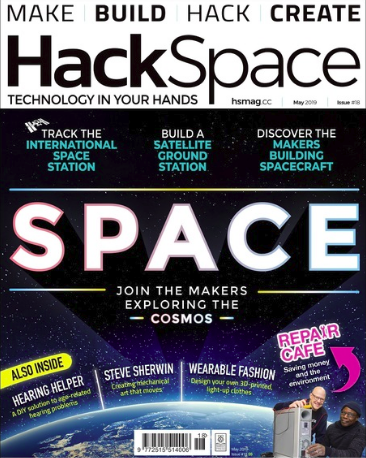 Issue 18, Big issue for me this one! I had the feature article on Space, featuring lots of maker/amateur satellites, a focus on Libre Space Foundation and a tutorial on setting up a SatNOGS ground station. Also had a tutorial on making a "Slim Jim" antenna and also the second part of the Kicad two part tutorial.

Issue 19, Tutorial on Marking out and Centre punching accurately for metalwork and I also wrote the space of the month article on the fabulous Prishtina Hackspace.

Issue 22, Let's Learn LoRa a tutorial on the ttn uno, the things network and a cayenne dashboard.

Issue 23, Tutorial on using Inkscape and SVG2Shenzhen plugin to create artistic PCB in KiCad. A write up of International Rocketry Week 2019 in Scotland.

Issue 24  Tutorial on making an antenna and optimizing it using a budget N1202sa analyzer, an article on the Arbor press tool, its uses and modifications. Finally, I did a small write up of the magnificent Wuthering Bytes Festival day.

Issue 25 Tutorial on FreeCAD and making CAM tool paths for CNC routers. A review of the RC2014 micro a DIY kit to build a cool Z80 based retro computer and I wrote Space of The Month which featured Hackerspace.gr the amazing hackspace in Athens and home of the Libre Space Foundation.

Issue 26 Tutorial on CNC routing building on and using the CAM toolpaths we made in last month's issue in FreeCAD.

Issue 27 Tutorial on Nuts and Bolts and threaded fasteners, includes how to identify mystery threads, and related issues like counter sinking, counterboring and spot facing. There's also a review of an arc ignitor kit as a direct from shenzhen article.

Issue 28 Tutorial on Boring using the lathe and boring tools and the milling machine and boring head. Also a review of the Pokitmeter a portable bluetooth DSO, Multimeter and data logger.

Issue 30 Tutorial on getting started with radios on the Micro Bits and a review of a portable workbench by Kennedy tools.

Issue 31 Tutorial on CMOS noise making/Lunetta's, making multiple voltage controlled oscillators with a CD40106. Also a tutorial on making Bench Blocks, useful for holding and working on cylindrical objects in the tool room.