Proud to have a rocket article in Hackspace magazine! 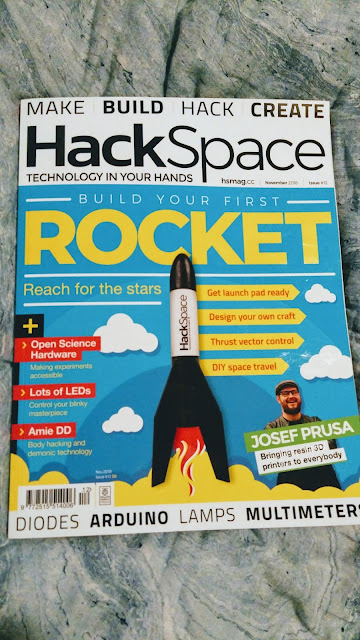 Rather wonderfully a couple of months this back the mighty Hackspace magazine visited Midland Rocketry Clubs "Midland Sky" event and flew a couple of their own model rockets and met and chatted with everyone there. They explained they wanted to run some rocketry features in an upcoming issue... And indeed the have in issue 12. It's not all rockets but there's a good chunk of rocket articles in there covering model rocket 101, interviews with the mighty thrust vectoring Joe Barnard/BPS space and also an article by yours truly! Based on a document I wrote up off the back of my rocket design workshops my article takes people through designing and simulating a rocket using the Openrocket software. Really pleased to be included and hope it helps bring a few new people to look at rocketry. You can download a free pdf of Hackspace magazine via the website but can also order a print copy which also can be found in all good magazine stockists! 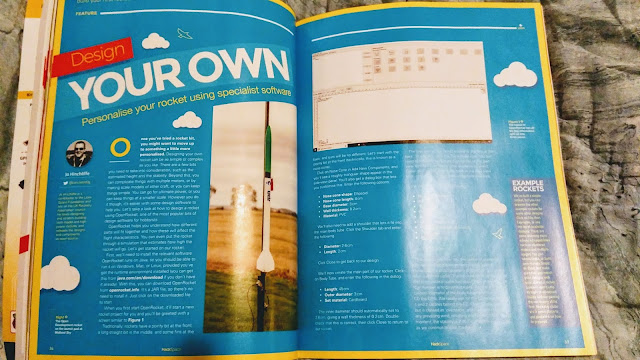 Scratch built 29mm rocket anchor point (Or why do things the easy way!) 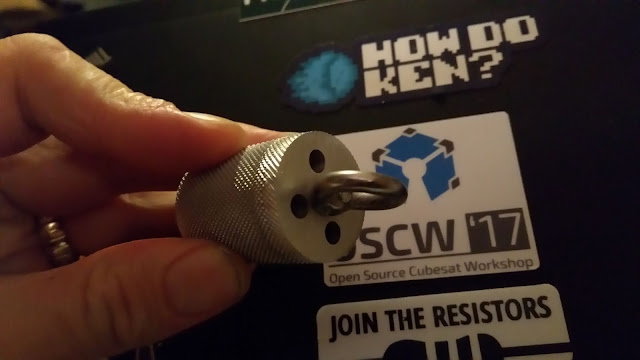 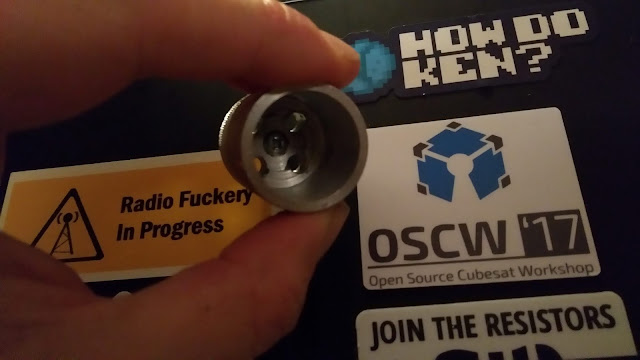 So I am working on a design for a minimum diameter 29mm rocket air-frame which means that the motor directly fits into the complete internal diameter of the rocket with no space around it. Common practice with larger rockets is to use an internal motor mount tube mounted in some centring rings, the fore centring ring usually is where the builder will place an eyelet or lifting bolt that will be the anchor for the recovery system/parachutes etc.

Obviously without this centring ring you need to come up with a different solution. I want to have the option of using the motor ejection charge so needed something that gases can expand through but also it needs to be strong. I recently picked up 2nd hand an aluminium anchor point for a larger 38mm air-frame off another rocket builder via Facebook and a discussion followed about how with a smooth metal outer finish it was difficult to get them to adhere/epoxy to the inside of an air-frame. So my idea was to make a similar anchor point to receive a lifting eye but to make it slightly under size and then knurl it to be a better fit and to maximise the keying surface for when it is epoxied into the air frame tube. The knurling is pretty badly done and definitely not decorative but it is definitely going to allow a small amount of epoxy to create the strong bond needed.

So why the "Why do things the easy way" bit... Well... after a search of the material/scrap pile I didn't have a piece of aluminium of large enough diameter to make this component. So I have done it the hard way! I started of making a very crude casting from some melted aluminium! With my very dinky little kiln! 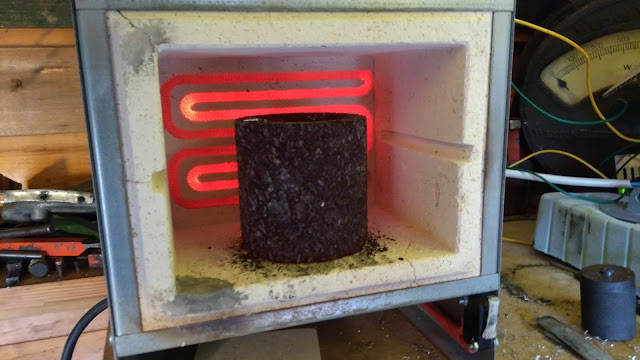 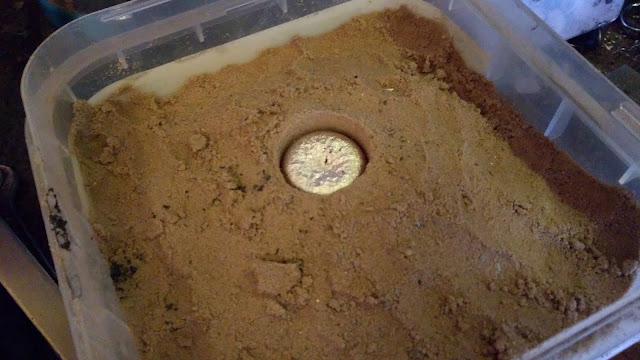 I then poured the melt into a crude mould made from some of my diy casting sand (silica play sand and bentonite clay sourced from cat litter (unused... I a NOT that much of a cheapskate!) 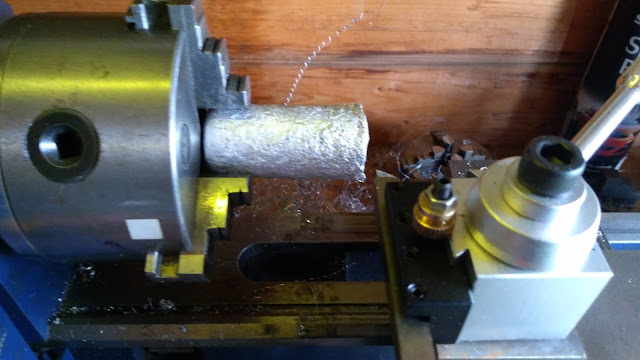 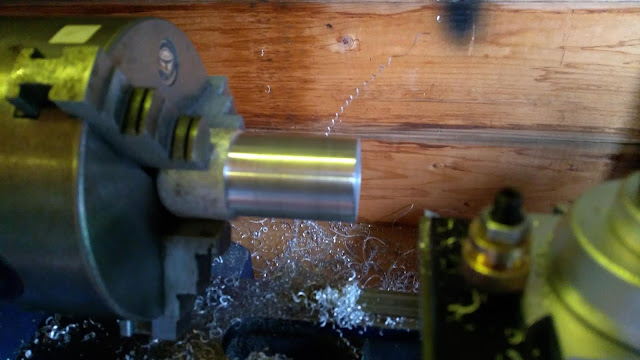 The crude casting was then chucked up in the lathe (the cheap 2nd hand mini lathe I bought a while back) and turned to round. 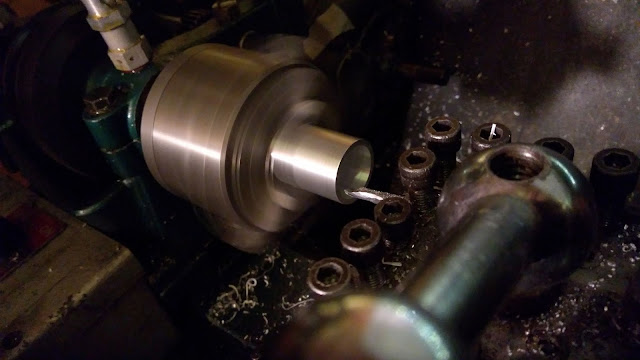 I then realised none of the suitable boring tools I had actually fit in the toolpost of the mini lathe so I parted off the job and transferred it to my old faithful perfecto lathe and bored out the inside. Its somehow more pleasing when you really have made something from scratch!
Posted by concretedog at 11:14 2 comments: 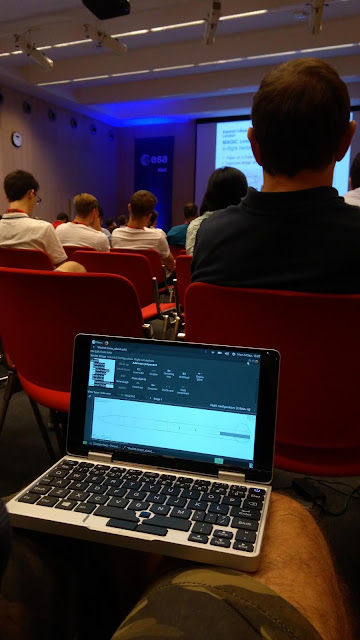 For many years I have been a fan of ultraportables... I owned (and still have) an original eee pc701 when they came out and I have owned a litany of PDA devices over the years and regular readers (a select group of amazing individuals) may recall I recently got Linux up and running on my linx1010b tablet.

I'd lusted a lot after a gpd pocket when they were released last year but the lack of an SD slot put me off. I loved the form factor however and so when I saw the very similar One Mix Yoga which has an SD slot I decided to take the plunge. The final push was that it had a backlit keyboard... Great for a bit of late night browsing or indeed checking a rocket simulation in a tent at a rocketry meet!

It's a great machine, preconfigured with Windows 10 it boots quickly and everything works. Mine had a stuck pixel on arrival but I am happy to report that it unstuck with some usage and has resolved. I'm not really a windows fan but do reluctantly use it occasionally so the plan was to try and get it dual booting windows and some flavour of Linux.

I'd seen that a few things weren't working for people under Linux on the one mix yoga, most noticeably sound, so I was prepared for some issues. I was also prepared after my linx 1010 Linux experiences to have some screen orientation issues to resolve. I tried 3 or 4 Ubuntu flavoured distros before settling on the most recent version of Ubuntu Mate. Having tried lubuntu, xubuntu and vanilla Ubuntu I was struggling to get screen resolution correct (it's a pretty hi Res screen) and was therefore delighted to click the Hidpi option in Ubuntu mate which instantly resolved all my tiny icon/font/cursor issues. I found that I could make my screen orientation settings persist under Ubuntu mate and I quickly resolved and got screen brightness controls working. WiFi works and hibernation is good... But I still haven't found time to resolve getting sound working or indeed swapping the axis on the touchscreen... An issue I faced and resolved on the linx 1010b.

So it's now setup to dual boot and this works well.. giving me an ultraportable linux box for doing bits of work on the go but I can also boot into windblows if I require a bit of surfing/media/youtube. 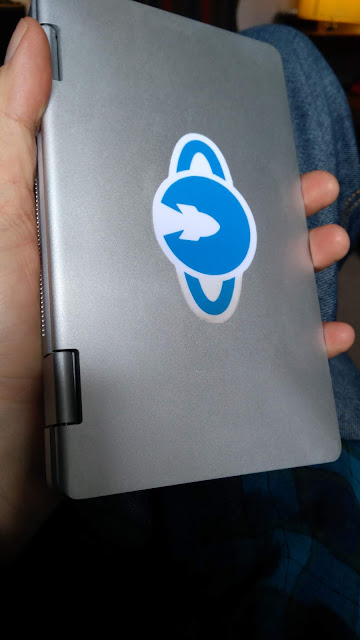 It is amazingly portable... Fits into a cargo pants pocket easily and is pretty lightweight. Despite having a slightly slower processor than the gpd pocket I find it's fine for some libreoffice on the go or for a bit of Openrocket rocket design work. The reversible hinged screen makes it an excellent ereader and flipping the screen disables the keyboard which means you don't disturb your reading with random keypresses.

Posted by concretedog at 05:02 No comments: