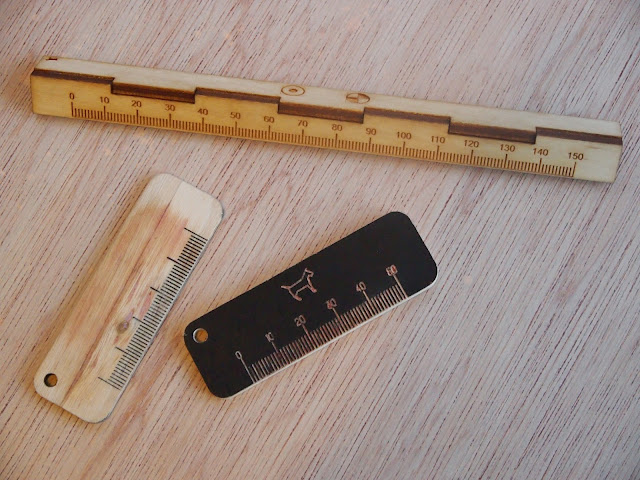 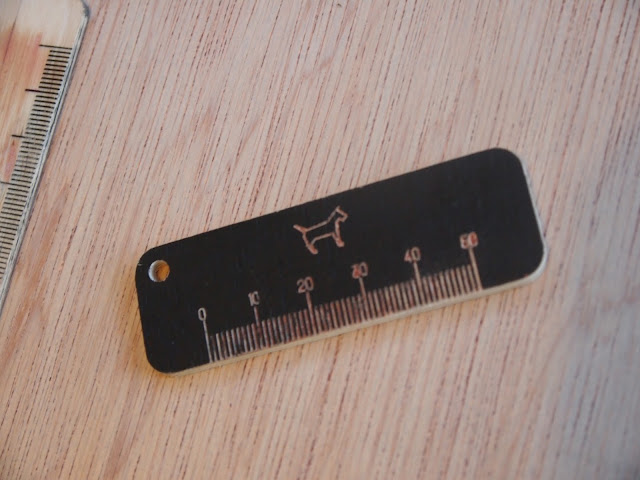 Yes.. I've been making rulers! It started because I wanted to make a tool to give away as a freebie at an upcoming Rocket Design Workshop I'm running for North Wales Tech group. One of the challenges when building small rockets is marking straight parallel lines onto the body tubes to mark fin positions or other attachments. A solution is to use a piece of angled bar as it will always lie accurately along a tube and cannot be off square. So for the workshop I thought it might be nice to knock up a small laser cut keepsake one complete with ruler markings and we'll put the workshop date and logos on etc. The two circle symbols on this one are used in rocketry to represent the centre of pressure and the centre of gravity which we'll be discussing in the workshop too so they act as a nice reminder. I cut these on the laser cutter at my nearby newly established Pontio fablab, which is excellent and its so easy to get good quick results on a laser cutter. However I can only access the space every now and again and wanted to see if I could make some rulers without a laser cutter on my cnc router. It's trickier.. the 2 small key chain rulers here are made on 3mm ply and have been engraved with a fine V bit, they are ok, but its difficult to get the resolution and clean cuts at this scale... I obviously need a laser cutter at home... feel free to send me one if you have one spare! Finally someone asked if I drew all the lines of the ruler sections by hand... there is a brilliant path effect in the mighty inkscape which allows you to create a scale along any shaped path.. brilliant!

I'm accidentally in a SPACERACE (and need your support) 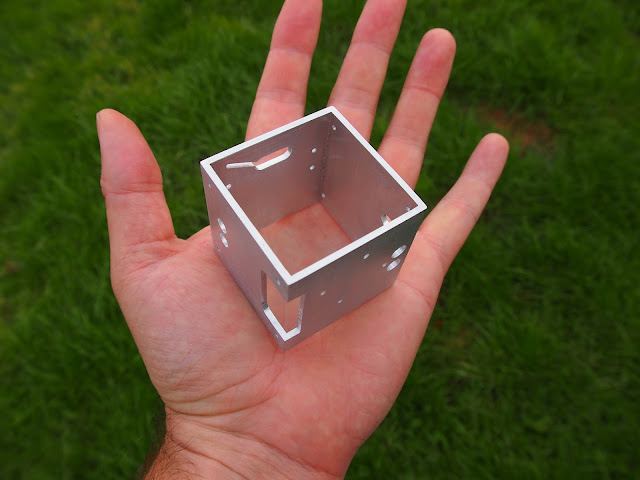 Today I sent another pocketqube satellite chassis I made for Paul over to Germany, I've sent them before but this one was special, it's hopefully a flight model.

So regular readers will know that I am involved with building this for a pocketqube satellite project that's main payload is an experimental propulsion system called an EMdrive. EM drives have been discussed for a long time and have created a lot of arguments about whether they work and/or whether they break the laws of physics.. neither of these debates am I qualified or clever enough to comment on! However recently NASA eagleworks paper on their experiments with EM drives passed peer review and suddenly EM drives are less contentious and are garnering much interest academically.

Shortly after the NASA eagleworks peer review story, Cannae inc began to talk about how they are planning a cubesat launch to test their experimental EM drive system. Now.. I do wish them luck and every success... but part of me hopes that Paul and our EMdrive satellite can get there first! Part of this is ego obviously, but another part of me believes that amateurs/DIYers..MAKERS like us deserve to hold the bit of history of placing the first EM drive experiment on orbit.

The trials and tribulations of amateurs/diyers/tinkerers/mavericks is infused in the origins of EM technology all the way back to Roger Shawyer the innovative British scientist who proposed them. So.. how can you help.. well, put simply, we need funds. For testing and validation and launch we will need to raise around 25k euro.. peanuts to most space agencies but quite a lot to us. Although funding space projects is always high risk (no greater a week to know this after the spaceX rocket RUD) and there are many ways to fail you should be reassured that Paul has experience building, intergrating and launching satellites with his previous pocketqube satellite launch WREN. You can also check out our extensive blogs on this project on Hackaday.io

If you can and want to be part of something that possibly could be a watershed moment for mankind and space propulsion please join the brilliant people who have chucked some money in the fund here.

And if you can't.. help spread the word about our project in the spirit of making, pioneering and adventure :)


Posted by concretedog at 12:24 No comments: