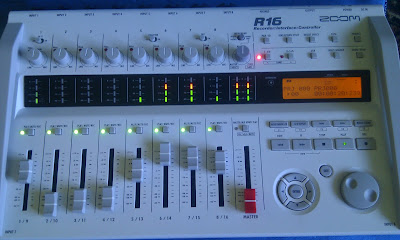 I've been wanting a simultaneous multitrack recording solution for a long while now, and these zoom R16 seemed like a good option for my needs. Its an interesting bit of kit..I don't know of anything else quite like it. Standalone it's a 16 track recorder with the capability to record 8 tracks at once to an SD card at either 16 or 24 bit at 44.1khz using either a mains adapter or 6 AA batteries. It has mic and line preamps on all 8 inputs and they are pretty good, a bit noisy and edgy if you crank the gain but certainly workable for the kind of sounds I'm recording.

On top of recording it has a rake of effects and amp simulators, phantom power for 2 inputs, a hi Z input for guitar or bass and also has 2 built in condensor mics.

Recording aside it also can act as both a soundcard/interface and again can record 8 inputs to whatever DAW you're using, in this mode you can record at up to 96khz. It's 3rd function is as a midi controller, it's compatable with the mackie control protocols which most DAW packages support (I use Reaper and this worked flawlessly)...although it acts as a midi controller there is no way of midi synching the recorder to any midi time code which is one drawback.

You can, of course, use the recorder standalone and then transfer the uncompressed wavs off the SD card and load them up in your PC, the R16 can act as a SD reader but a very cool feature IMO is it can also act as a USB host meaning if I create a track on either my phone, PDA, micro br etc I can import it to the R16 without turning on a PC..also you can back up audio files onto a USB device this way.

All in all I'm pleased with it and it supplies and awful amount of functionality at this pricepoint. It's not a bit of kit for everyone but certainly useful for me.
Posted by concretedog at 14:16 4 comments: 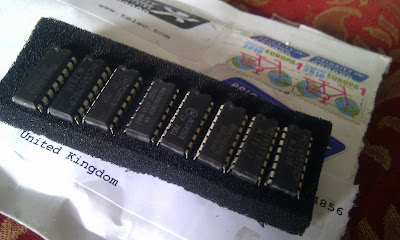 Rare, much needed, obsolete chips through your door from the Netherlands, in 3 days, at a good price. Aaaaah bliss!

Posted by concretedog at 05:28 No comments:

I'm continuing to explore the tap looper concept and have come up with this schematic for a variable length, tap programmable looper (click the above image to open it in a larger window). The great thing about being able to vary the length of the register is that you can then create sequences in alternate time signatures as well as 4/4. This variable shift register IC the MC14557 can be programmed to create any register length up to 64 bits..in the video below I am using 48 bits to create a 2 bar 3/4 time signature using 8 bits per 1/4 note resolution. I am pleased with this design (mostly as really it is the first thing I have designed from scratch based off the info in the datasheet) however it has the same shortcoming as the 4031 based tap looper- that it only maintains resolution at faster tempo's. I plan to experiment with cascading 2 of these registers, doubling the length of any given loop so that I could create 4 bar sequences at higher tempos and 2 bar sequences at lower tempos whilst still maintaining enough resolution.

Feel free to use this schematic however you like but give me a credit if you can :)