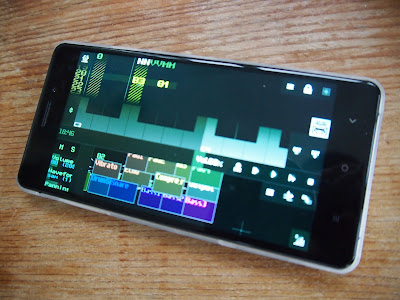 So for as long as I have been writing this blog and longer I have ALWAYS (everyday) 100% had something on my person that allows me to play with creating music... and I put most of this down to the mightiest blog Palmsounds who celebrate being 10 this month. Above is my phone with the AMAZING Sunvox application on it (a complete studio tracker application built by Alex Zolotov which he maintains across the most diverse range of hardware and os's.. maemo/amiga/palmos/wince/ios/android/rpi etc)

I have always been fascinated with mobile tech and my first real love was PDA's particularly the palm range (although I didn't come in at palm III I came in more around zire/t3 era) and this was fueled by the discovery of Bhajis Loops and Microbe... which.. yep you've guessed it all stems from Palmsounds... As does my gameboy collection, my collection of portable hardware multitrackers, my chiptune carts..currently rocking "chord" by Humbletune (a developer I know though Palmsounds!), my field recording kit.. my PDA collection.. which is large.. but pales in comparison to the Palmsounds PDA stockpile! :)

Palmsounds has constantly and consistently been both at the cutting edge of mobile audio, promoting new apps and developers and systems but also has kept an eye on all the wonderful fringes of the scene, if someone has hacked an old calculator to play music you can bet Palmsounds will cover it!

So many developers and apps and hardware have had a push (or indeed have originated from Palmsounds idea's/community) and Palmsounds continues to support and push the boundaries of the industry and the market. I know of many companies whose success would be much lower if they didn't have Palmsounds to push their ideas/products out and guide them with a bit of sage wisdom from time to time.

Finally.. am privileged to have the owner of Palmsounds as a great friend (and colleague) in real life now and also have a list of brilliant people I have met in real life through palms sounds...

Here is to the next 10 years...keep being brilliant Palmsounds ( I imagine Bhajis will run in emulation in my retinal implant by then... cool)
Posted by concretedog at 11:13 No comments: