So it's been a while. I haven't been building much of late that is of a musical/noise/sonic ilk due to a few distractions. Ages ago I posted a timelapse video (done with the hacked £15 canon camera)of me rebuilding a small 2 stroke engine. Well I've been building the rest of the "Mo" (I'd say Moped but it has no pedals hence just Mo). Here's a pic from a couple of weeks ago when I got it back to a rolling project and a picture of the frame all stripped down. 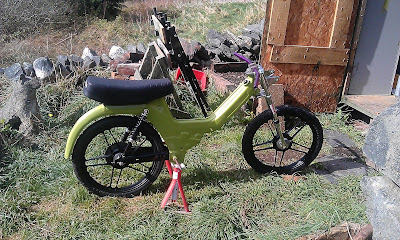 (Notice the rare sighting of the concretedog in the picture that gave me my moniker). 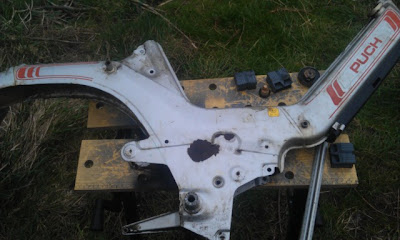 I've also been doing a lot of music, but mainly guitar playing for a grand hip hop octet gig a friend of mine put together for last week...amazing to do a less experimental gig with 60 people dancing!! Great fun to play with a horn section...that's been a while. My next gig is at my bro in laws wedding which (due to last minute cancelling of other musicians...SHOCKING BEHAVIOUR)involves me doing a guitar set including a loopstation version of the Foo Fighters "Best of You" so the transposing and arranging chops have had a workout too.

In amongst all this I've managed to have a couple of more creative sessions...I've been contact mic'ing cymbals/cymbal stacks for more shonky percussion... 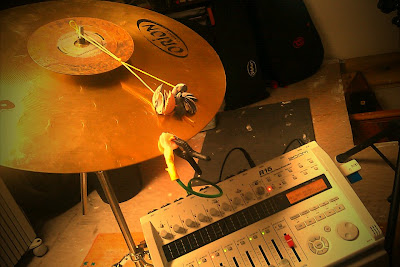 and been writing stuff in the new mighty version of Sunvox (vers 1.7) this new version now has the ability for realtime recording which has completely added a new dimension to the workflow....and it still rocks on my Jornada!... 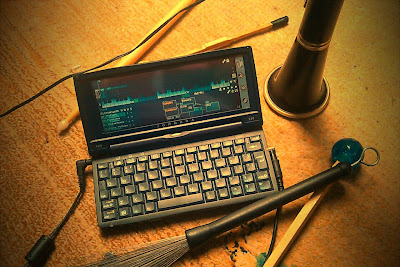 So in another couple of weeks this wedding gig will be out of the way and things will return to normalish and I should have a bit more time...I have lots of ideas, some musical (I reckon another release by the end of the year ish!) and some more on a tuition tip and possibly even a concretedog product or 2! We'll see. In lean blog posting times likethese I do still tend to tweet a bit so feel free to follow me on twitter.

Posted by concretedog at 12:55 No comments: