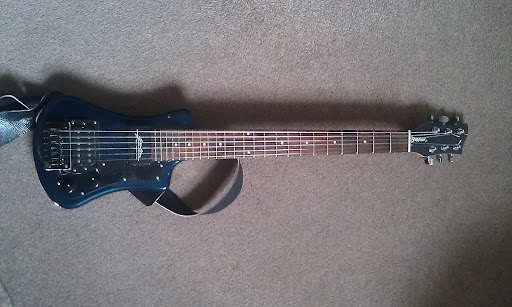 I've just dug out my old faithful Hofner Shorty travel guitar as I'm going away for a few days. I love this guitar as its been on some adventures with me over the years and is the guitar I've travelled with most, its been on planes, atop mountains, on boats, strapped to bikes and backpacks, been in the snow...the list goes on. Last year I accidentally killed this guitar, I like to play with heavy gauge flatwound strings and as an experiment I tried a set of 15's on it and the tension became too much for the original bridge posts and they got pulled out of the body....whatever I did I couldn't get the bridge posts to bind back into the body holes and whenever I restrung it it would pull them out. So in the end the solution was to buy a fender style bridge with the holes on the back of the bridge designed for through body string mounting...however I had to build up a small wooden block to bring the bridge to the correct height...took ages to get everything levelled up and getting the new bridge to mount centrally. Whilst I was at it i thought I'd fit this signature "Atilla Zoller" pickup as I wanted a more neck pickup sound than the humbucker that is in its original mount at the rear of the body. I had to dremel a groove under the scratchplate to fit the cable for the neck pickup but it's well worth it as the floating pickup sounds great. Currently the bridge pickup isn't wired up but I think at some point I'll wire it to another output so I can do dual output/effects chain recordings.

Anyway she aint pretty....but she's one of my favourites for sure...I reckon the pickup is worth about twice as much as the guitar and bizarrely the strap I always use on this guitar I bought at a fundraising auction for a music charity and it used to belong to Mundell Lowe, the great (90 odd year old) jazz guitarist who played with em all, mingus, parker, etc etc 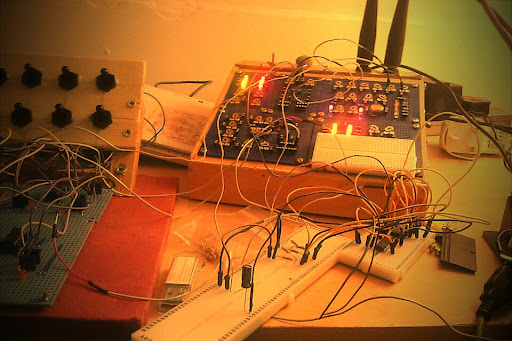 Just a quick post as I'm deep in the throws of breadboarding and patching ideas together to see what I'm going to build into the origami synth.

Posted by concretedog at 13:31 No comments: 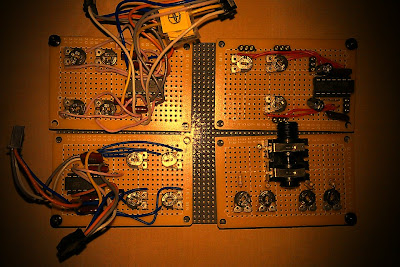 So I'm making manouvers on my next projects post the album I am doing some building and also beginning to write some new stuff and try out different setups. My next ambition is to write some stuff that I can perform somewhat live, my plan being to lay down audio tracks but to have my cmos/diysynth stuff and some circuit bent stuff midi'd up that I can manipulate live....I've got lots of ideas and I'll post something as soon as something gets done!

As part of this next project I'll need more diy synth stuff as I will need to have different setups patched up at the same time as part of a single performance/piece ready to play different sections (I can't really repatch 100 tiny wires live just for the upcoming chorus/middle eight!) So I am back to building.

I've come up with this idea...I wanted my next lot of synth stuff to be really portable so I can take it out and about and play with it on location so to speak..so in order to make it as compact as possible my next synth will FOLD!

So the photo at the top of this post shows the synth in it's folded state and hopefully this next picture will explain what I mean by folding! 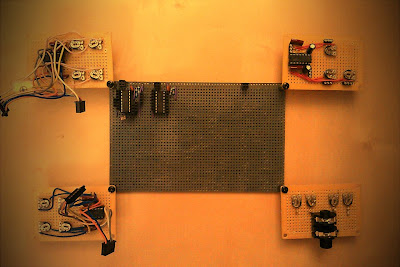 The modules attached in the corners aren't actually what I'll have, they are previous stuff I built and just attached to show the idea...I may even try another tier of stuff so that the folding boards fan out from the corners!

In other news the mighty Adam Walton was kind enough to play me again last night on BBC Radio Wales the iplayer of the show is available here for the next 7 days.

Finally you may notice I've had a bit of a sort out on this blog, placing some nice clicky images linking to my album and my previous ep. There's also a button for if you'd like to follow me on twitter.

Posted by concretedog at 15:24 No comments: