Just a quickie post (3rd this evening...some kind of record I reckon!) I put up a new demo of a tune I've written (although I'm not sure it's finished) it's called "Peh" and its here...

Posted by concretedog at 14:37 No comments: 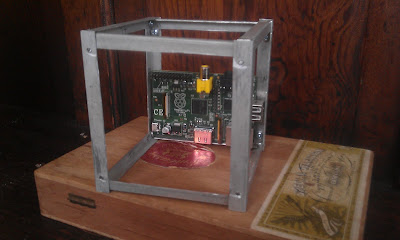 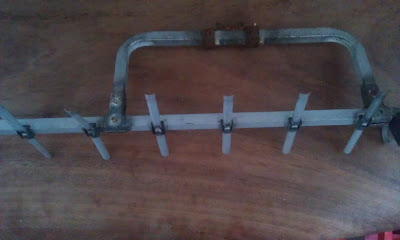 So I am still allocating a little thinking time to my cubesat obsession, I've been meaning to post about this for weeks but never seem to find the time however having appearred to have got my good friend obsessed with cubesats also I thought I better had!...I've built a Cubesat frame model out of scrap aluminium cut from an old tv aerial on my scrap pile. I've made this to adhere to the dimensions of an official cubesat although it is nowhere near the required +-0.01% tolerances a flight model would have to meet, (it also would have to be 6061 or 6063 grade aluminium but heh). I got the idea to fabricate one from a frame made of aluminium angle as it is friendly to home fabrication with handtools but has also been considered as a cubesat design before ( I took my inspiration from this document)

Inherently a frame structure from separate lengths of angle has some structural problems. In its current state, with each bar held at each end via a 3mm diameter threaded bolt, the whole structure has strengh but lacks rigidity and can skew about its angles. Cubesat specifications actually call for some extrusions that sit proud of the corners above the rails that act as standoffs containing kill switches for power and separation springs that aid ejection from the deployment pod. I imagined and consider that a framed cubesat design could utilise castings containing the standoffs and molding for springs and switches could be triangular in shape and could cross the corners of the frame adding strengh and diminishing skew.

I also (if I had smaller preciser taps) would use multiple smaller fixings for each beam...it has been a great challenge of skill to tap a 3mm thread into aluminium that is only 1.5 mm thick!! In a flight model you also couldnt have steel screws/bolts lying flush with the outside of the rail as the fear of the steel cold welding to another touching cubesat causing 2 cubesats to fail..eeek!

Of course having built a small aluminium model I couldnt help but just see if my raspberry pi would fit in it! It does but would require adaptation to fit in with the sd card inserted! (I'm not sure a pi would be a good brain for a cubesat...quite power hungry!)

Anyway as ever my ramblings about cubesats should be taken with a pinch of salt as I am only in it for the thinking and learning!.....and dreaming!


Posted by concretedog at 14:35 No comments: 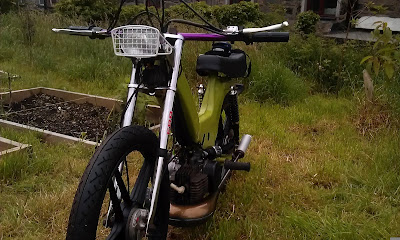 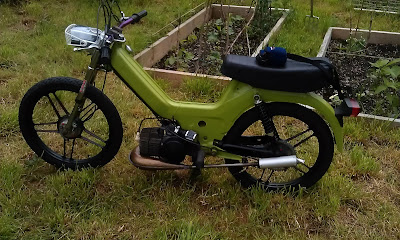 I threw a load of work at the Puch Maxi project over the last couple of weeks and at one point I almost had it finished! I got the engine in and the wiring loom on and all the electrics working etc...unfortuneatly I seemed to have not quite tightened the magneto flywheel well enough and it caused me to shear the woodruff key keyway causing damage to both the flywheel and the crankshaft...B#$(#(cks! I added insult to injury as when removing the damaged flywheel I used a makeshift piston stop through the spark plug hole and despite being careful I've managed to gouge some scars into the piston and also chew some of the threads on the cylinder head (although this would be fine i think). So I've decided to take a break and put this on the backburner for a bit as the summer weather is awful I am less inclined to get it on the road this summer anyway! I think I'm going to do another rebuild of this engine with a new crankshaft...I always try and put better parts into things when I rebuild so I'm going to replace it with a race crankshaft (bigger big end, small end has bearing and cranks are lightened etc) and as I'm at it I think I'll buy a racier overbored cylinder kit as well!! The great guys I order from at Puchshop are on their summer break/holiday for a few weeks so I'll get to ordering the bits in a few weeks time! So for now enjoy the above images knowing that she actually sits in bits in my shed!!

Posted by concretedog at 14:12 No comments: