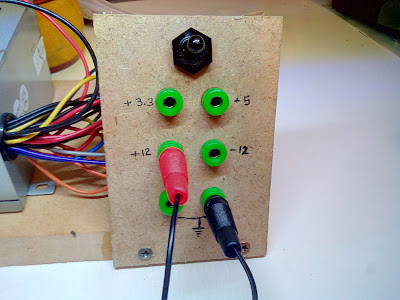 So a couple of little projects in between everything else this weekend. Firstly a classic hack turning an old ATX power supply into a bench top power supply.. I'm not going to go into too much detail as there are THOUSANDS of instructables and blogposts on how to do this out there.. I had to add a 10 watt 10 ohm resistor dummy load across the 5v rail to make all the outputs create the correct voltages. Of course I used the CNC to make a little breakout panel which was interesting in terms of I realised I am at the point where it is quicker and more accurate for me to whip up a quick drawing in inkscape and rout it rather than breaking out a drill and saw! 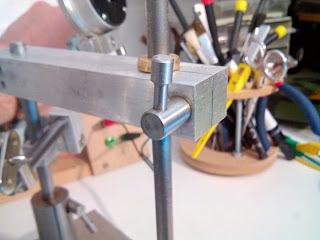 Second up links to my previous post .. all the universal clamps on my stand system are closed by 4mm threaded systems usually a bolt with a handled nut like so.. I hadn't made any more of these and currently am sharing the couple I'd made between different bits of the system. These are great but equally take a bit of time to make as they require quite a few operations. The handle parts are press fit into a 4mm reamed hole as well as the tapping etc..and they also use up my meagre supplies of nice EN1A steel! So I whipped up some nice knobs from some 6mm MDF with a routed hexagonal hole into which I could press fit a M4 nut with a blob of super glue, they work really well. 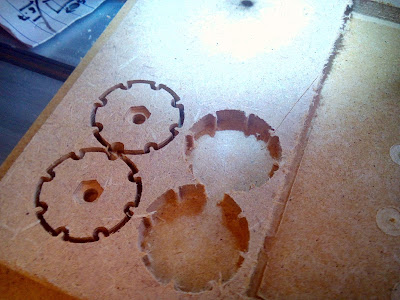 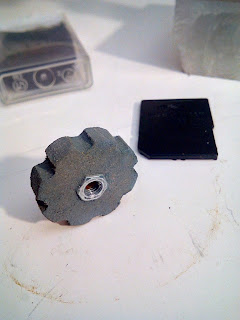 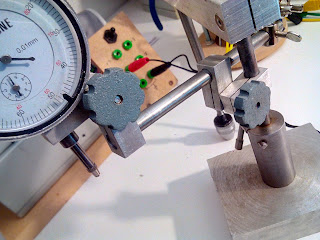 Posted by concretedog at 13:23 No comments:


Got some time in on some projects of late and today I finished making a small project.. that I needed to make as part of another ongoing project! The overlying project requires some tapping of M2 threads through some 10mm aluminium bars and I am keen to make the threads as accurate as possible as I want to make sure as much of the thread is engaged as possible when the bolts are fitted. I am reasonably good at hand tapping and also use the tap in a pillar drill or tap in the tailstock technique but for really small taps I find that you lose a  lot of feel this way which can result in broken taps or malformed threads. So I needed some form of sensitive tapping stand that allows you to keep the sensitive feel whilst guaranteeing the vertical introduction of the tap to the workpiece. As this is only for small work I decided to make an arm and chuck shaft that would fit onto my existing (and ever growing) clamp stand system that started out based on Harold Halls Dial test indicator stand. So the chuck shaft is held in the bush and arm vertically whilst still being able to be turned and lowered and raised through the reamed brass bush. I made a bit of an error on the hole to attach the assembly to the main upright and made the hole slightly oversize (dodgy sharpened drillbit!) Although the clamp would clamp it only just held so I added 2 grub screws which hold it firmly. It's actually quite good that way as I can roughly set the clamp height quickly and then secure it afterwards. 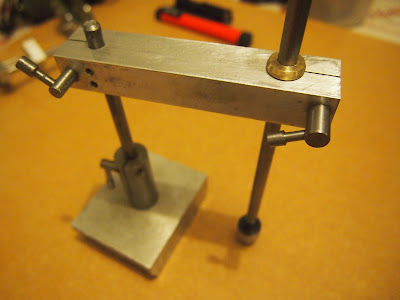 The chuck shaft is formed from a bit of mild steel and a cheap small drill chuck from ebay. I turned the shaft of the threaded keyless chuck into a taper and made an undersize taper bore into the steel shaft, then a careful few pressings on the arbour press and it is well attached and straight. I just need to make a handle section to apply the required turning..I'm considering whether to make a press fit knob for the shaft or whether to machine some flats into it allowing tapping handles to engage it. 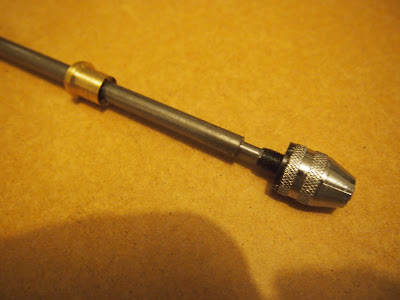 Of course the thing about all the accessories being compatible is this can be used in conjunction with other items! It also occurred to me the chuck shaft could be clamped in one of my universal clamp assemblies and used as a pin vice. 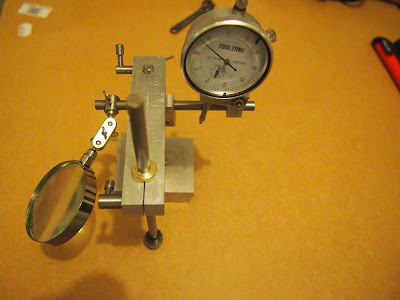