So I've been plugging away on a few projects slowly in the background over the last couple of months one of which is developing a collection of stackable 22mm diameter PCB which are designed to fit inside a common small estes rocket body tube diameter but also could be used for all kinds of rocket or none rocket related projects.

I'll come back to those but breifly wanted to show the video above which is a prototype of an ematch ignition system that I've made using my 22mm boards. At the moment the circuit awaits a defined delay time and then fires a mosfet to send the current to the ematch ignitor. These type of systems are used sometimes in high power rocketry to ignite a small black powder or pyrodex charge to separate 2 sections of a rocket to deploy a parachute for recovery. Sometimes instead of a timer the ignition circuit is linked to an altimeter to deploy the charge and resulting chute at a specific altitude on the way back down.

So back to the 22mm project.. I realised I was at risk of forgetting what little I know about KiCad (my preferred opensource electronics PCB design package) and wanted a project and have though for a while a collection of useful small boards would be worth having. So I've designed two boards so far and had them made by OSHpark which has been a fabulous experience... you don't even have to battle to get your gerber exports sorted for OSHpark as they will work directly from a KiCad PCB file... just upload... check the preview render of the board layers in your browser and if ok... hit order!

So far I have a board for SOT89 power regulators and a board with an Attiny85 and some power indicators and an LED! The next board will be basically a prototyping board (think veroboard in the 22mm form factor) and I have a few ideas beyond that. I am determined to (after the prototyping board is done) to get all the files on github so anyone can order some if they think they might be useful. They stack and have holes for M2 threaded bar which is connected to ground to minimise power wiring.

Some pics of the boards 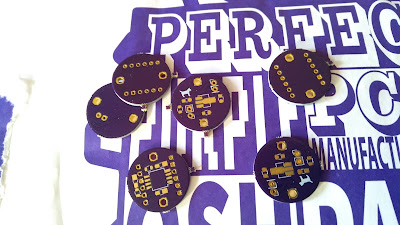 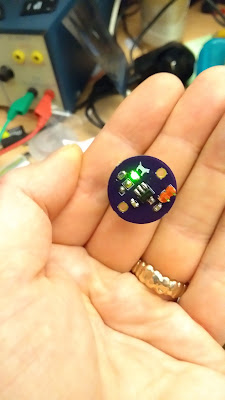 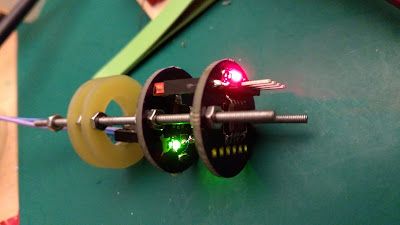 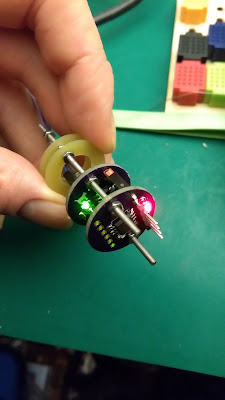