So heres what I did;

I took some PVC gas main type piping I pulled from a skip a while ago...its about 80mm in diameter and the walls are about 10mm thick...I cut a length that's, I guess, around 12cm long (just done by eye no measurements!) 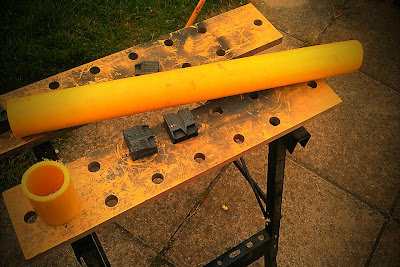 One of the ways I wanted this to mount was to be able to go onto camera tripod style mounts. This means it could be used with my favourite camera clamp (more on that later) but could also use those mini camera tripods, real tripods or even (although I don't currently own one) one of those gorillapods. So I drilled a pilot hole and taped a thread into the PVC.. 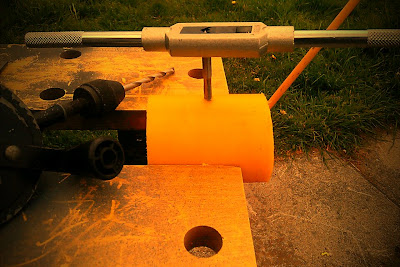 I also wanted an alternate mounting point, so on the opposite side to the camera mount, I drilled and mounted a small angled plate/bracket of meccano origin! I did this as the holes in the sides of the plate could be useful if I need to string up/hang the shockmount from cordage but also the whole plate could be grabbed by my microphone stand clips (I use the squeeze clip, one size fits all type mic stand adaptors see pic later) 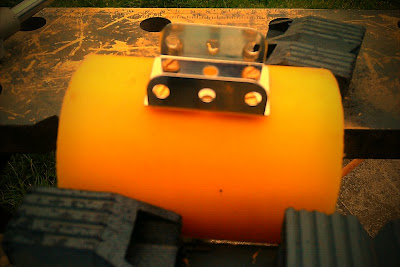 I then cut some grooves at either ends of the tube to hold the elastic bands in place (I ended up using some hair bands). I also cut more than one set of grooves as I found I needed different tensions across the face of the mount when I placed a mic in it. This is as mic's can be heavier at one end so the ability to tighten the bands by shrinking the hole that the bands create allows the mic to be gripped well at each end regardless of its weight and shape. This is important if you want to mount this tilting downwards so the mic doesn't fall out.

So here are some pics of it finished. These first ones show the mount on my favourite adjustable camera clamp I found in a charity shop a while ago for a pound! 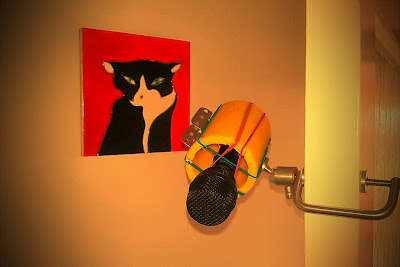 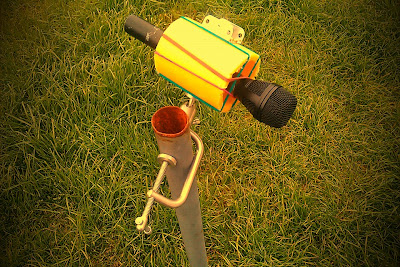 And this one shows it more traditionally on a mic stand using the clamp onto the bracket. 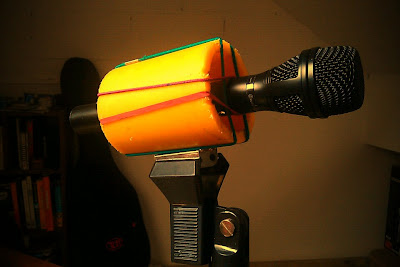 BTW the mic in these shots has become my favourite over the years (I have a small collection of cheap mic's!) its an Audio Technica MB4000c I bought second hand for next to nothing. I love it, it's a small diagpram condensor cardiod and is really clear and has low noise...I've never heard anyone else say they use one but I think it's a gem!