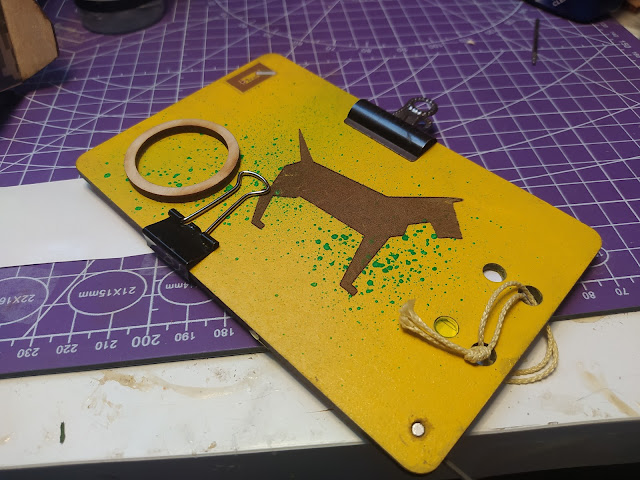 Someone IRL made comment on this the other week as I pulled it out of my bag and it was noteworthy to me only because I hadn't considered that I'd made this object, even though I had! People may or may not know that I always, ALWAYS, have index cards on me! I've been a fan since the 43 folders Hipster PDA idea's were floating around but also, I used to pride myself as being able to create some kind of workshop activity at any moment, so long as I had some index cards and a pen.

Aside from workshop materials, index cards are in constant use for note taking, but they are also cheap enough that they often are pressed into use as a place to dump some glue, or to cut and craft a quick card prototype. The problem they do suffer from though is they get pretty scruffy when a stack is just held in your pocket. So, I often have them binder clipped together and they often in turn get binder clipped to a board. I have a few boards knocking around and they often become focused on notes for one project. 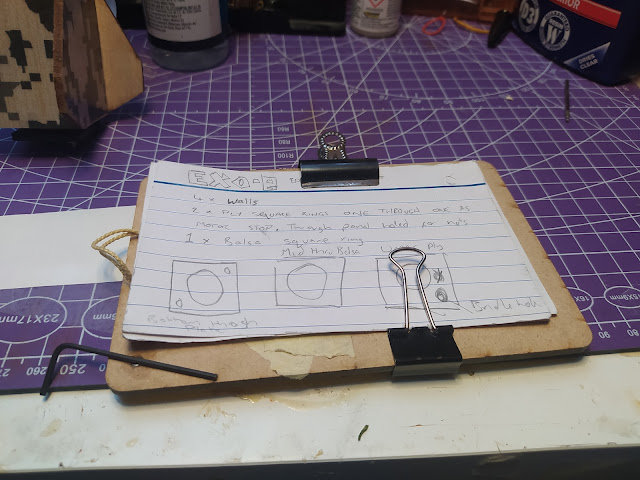 Anyway... this board that caught someones eye... well. I'm pretty sure it started off as a failed lasercut base for a little lollipop stick crane I made for a Hackspace magazine article and, as it was around the right size, it got pulled from the pile and some index cards added. It then started getting used for notes for a rocket related project and the rather overkill kevlar cord was added to hang the board up in the shed, the kevlar being an offcut from the rocket project. The decoration was an experiment I wanted to see how well my diode laser CNC rig would remove paint for an interesting engraving effect so I quickly slapped paint on the board as it was to hand near the laser rig! Laser cutters produce lots of bits and bobs of off cuts and I have absolutely no recollection of why I glued a small yellow piece of acrylic into one of the holes, I imagine it was just because I was fiddling around and realised it fit. The circular piece of wood is another laser off cut, I was working on *something* I can't remember but it had a lot of small screws, the bench I was using was scaffolding planks and there was a high chance a screw would disappear in a crack... so I glued a scrap ring onto this board and had a safe place to put small screws. Similarly I was working in the shed and was repeatedly using a small Allen key which I kept misplacing, the project also involved some tiny neodymium magnets and I had spares so I drilled a small hole in the board and glued one in. Later I ran a workshop on NFC stickers and how to get them to do stuff when scanned and a spare sticker ended up on there. I would love to tell you this links to the rocket projects files/repository but it probably doesn't, I should really add my phone number or an "if found return too" note on it.

So there we are. It's a thing that is definitely made, and probably made in my favourite way, in a responsive, tinkering, flaneurial spirit!