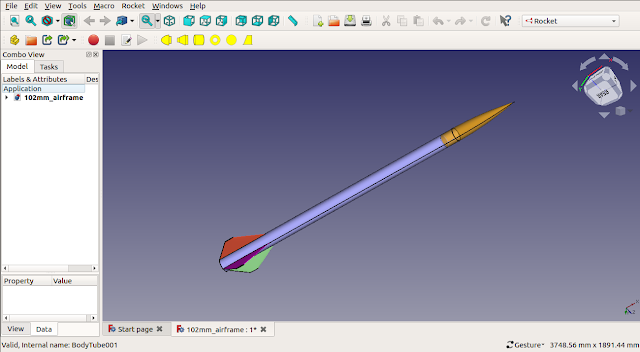 In my never ending quest to get more opensource stuff around rocketry going I posted over at the FreeCAD forum about a concept for a Rocketry themed workbench. It seemed like it would be a good fit and that it might be an interesting area for developers to work on. I explained how I'd often used Openrocket to design and simulate a rocket design and then, quite often, I found myself copying dimensions into FreeCAD or sometimes OpenSCAD to create 3D objects of nosecones, centring rings, fins and more. I suggested that automating some of this would be a good starting point, but that also the sky was the limit, ultimately it is *possible* to recreate something like Openrocket or Rocksim in FreeCAD, with the benefit then of any design is auto-magically in a CAD format for other techniques to be applied. FreeCAD already has a wealth of tools that can be leveraged at rocket parts, from 3D printing mesh tools, to CNC toolpath work, through snazzy computational fluid dynamics tools,  FEA and more. Hell, there'ss even a glider workbench for designing gliding parachutes within the community so the end really is limitless!

What happened next was utterly brilliant and testimony to opensource culture! People got interested and one chap, Dave,  (AKA DavesRocketShop ) got stuck in. Within a couple of weeks we now have a rocketry workbench released with some useful tools already up and running. Also there is a tantalising roadmap of exciting features to come. 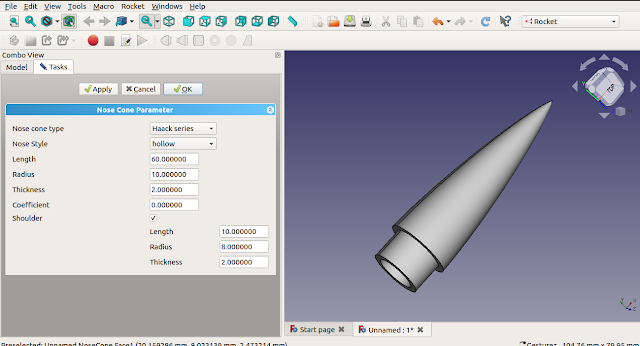 The first release when installed as a workbench gives you some parametric tools to create rocket air-frame components. Nosecones in all the common geometries are all there, Haack, VK, Ogive, Parabolic series, Power series etc. Transitions are similar in choices and there are tools to create body tubes, centring rings and bulkheads. It's really straight forward to begin to assemble great parts that can be adorned and edited using the entire suite of tools FreeCAD has to offer. Fins, in the first release, are limited to trapezoidal designs but there are a wealth of parameters to play with and it's trivial to auto generate aerofoil geometries etc.  The rocket workbench is already available via the addon manager which makes installation and updating a breeze and on the forum thread the mighty Dave is occasionally releasing manual install versions for those of us keen to try experimental features. 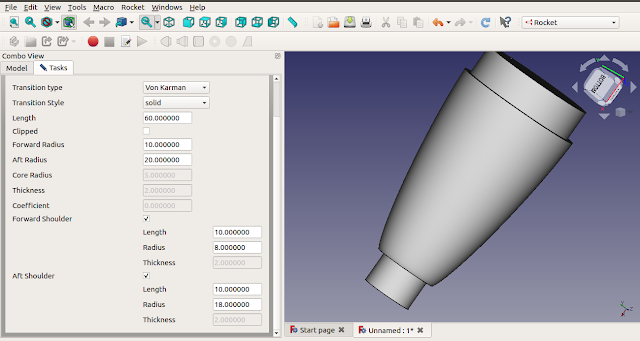 Dave is currently working on importing parts from the openrocket databases. This is really interesting as all the common manufacturers parts are in there, so if you want a particular Estes replacement nosecone, or to upscale one for some crazy project this will be but a click away! I'm most excited about that there is a plan to allow the workbench to import Openrocket, Rocksim and RASAero files, whilst that may be some way off it really opens up some astonishing opportunities for rocket designers. Also having got to grips with the technical drawing workbench in FreeCAD I am looking forward to being able to document my designs well, important if one day I go for L3 HPR certification.

Finally if you are new to FreeCAD but want to try FreeCAD I'm writing a reccurring series for Hackspace Magazine on FreeCAD and it started back in issue 37 here.