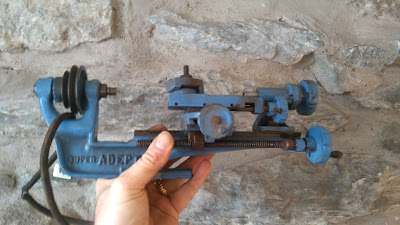 I've been keeping my eye out for a Super Adept lathe (at a none inflated price!) as I have always wanted to have a play with one particularly after reading this thread about a major renovation and modification of one  over on the Model Engineering forum. These adept lathes seemingly are quite sought after now, despite them having a reputation for not being very good! They were indeed manufactured to keep to a budget, castings can be quite rough and they aren't particularly set up to be precision machines. It's definitely the case that you shouldn't buy one expecting it to be a quality watchmakers lathe without being prepared to do a lot of work on it.

This one has arrived in reasonable condition with the spindle and spindle plain bearings in fair condition and not worn out. I can adjust the split bearing to get rid of any play on this the original spindle. Many people have modified theirs with new spindles and bronze bushes but until that's necessary on this one I'll stick with the original spindle. After some slight tinkering and adjusting of the jib strips (one of which on the compound slide is in a poor state) the lathe seems to move quite freely and the ways are in good order. 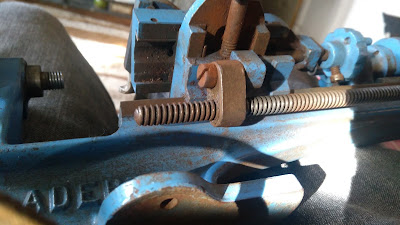 At some point some disassembly must have occured because the lead screw nut appears to have been assembled onto the wrong side of the carriage. Every picture I can find shows the nut being mounted to the back of the carriage and this makes sense in terms of forces when performing cuts.

There are a couple of other issues that need addressing and I also have some plans for slight modifications. One issue is that the original tailstock spindle lock nut/handle has been replaced with a simple bolt. The original handle (and its been attempted on the replacement bolt) is supposed to have a pip on the end that registers with a thin keyway on the spindle and stops the spindle from spinning. It's not quite enough of a pip left on the replacement bolt and it means the spindle sometimes spins in place and this has created some damage (cosmetic) to the spindle itself. A replacement handle is needed. There are also no accessories with this lathe and as such I need to make or modify some to fit. I need to make some adaptor plates for some small chucks I have that are on a Unimat thread and then it will have a 3 and a 4 jaw chuck. I need to make some centres for it, which is a little tricky as they are apparently an MT0 taper, but none MT0 standard diameters so some guess work and test pieces need to be made. Other items I plan to make include a tailstock centre mandrel for a small drill chuck, a faceplate, miniature driving dog, possibly some new handwheels/handles, some small oilers for the headstock as well as of course fitting a small motor and creating a stand/box/mounting board for it. Stay tuned for updates!

Finally, there's lots of links around for Adept information but I couldn't find anywhere that listed all the thread types for various parts so my own and others reference;